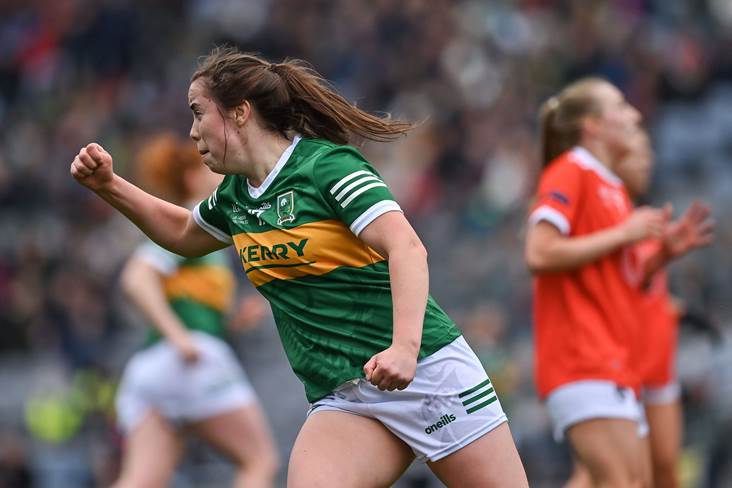 Danielle O’Leary was called upon just after half-time on her last appearance at Croke Park – and she bagged 1-2 for Kerry in the Lidl National Football League Division 2 Final.

It helped secure a brilliant victory over Armagh and there were no nerves on show from the dynamic 19-year-old – until the post-match interview on TG4.

“I definitely wasn’t used to it at the time, to be honest,” said O’Leary.

“I remember standing there before the interview and I actually couldn’t think of a word to say. I had absolutely nothing prepared.

“I was nearly asking the man beside me, who was giving me the player-of-match plaque, what to say because I hadn’t a notion.”

But O’Leary took to it like a duck to water, just like she has throughout her life, always excelling across the board. And her camogie career is the perfect example.

The Rathmore native only started playing the sport in college at MTU before Christmas and she is already on the Kerry camogie team.

“It has been football all my life so I just wanted to start something new. Camogie was supposed to be an off-season thing to keep me busy but once I started I couldn’t stop,” said O’Leary.

“Starting out, I knew how to puck the ball but in regards to everything else, I didn’t have an iota. For me. anyway, the most difficult thing was trying to pick up the ball.

“At that time of the year with college, you are facing the winter months so you’d hardly find a piece of grass there to push you along. It was definitely hard for me. I spent a good two or three months at least practicing until I actually got the flow of it.

“I am able to hit off both sides but that didn’t come in one week either, it took ages, actually longer than what I expected to pick up the skills of it.

“It was lovely going to training every week and seeing a bit of improvement in my skills. It really drove me on.”

Ladies football remains number one in O’Leary’s eyes, especially when she has a TG4 All-Ireland Senior Championship semi-final to look forward to back at Croke Park today (SAT).

However, when she was younger she would normally be seen playing with a soccer or rugby ball.

“When you go to school, you are playing soccer and the boys always wanted to play soccer, so soccer it was,” said O’Leary.

“The only time I had a football was when I was on my own but if there were cousins involved or my family, it was always soccer or rugby.

“My best memories were probably the evenings in the summer where it’d stay bright until 10 o’clock and we’d all go out and play a game of soccer. We’d be in the front lawn and Mom and Dad would come out to us and we’d play four-on-four outside.

“We’d be there for hours, we’d always say last goal wins but it was the never the last goal. The other team always wanted a second chance.”

O’Leary knows the importance of sport right through her childhood, and she was toughened up by years trying to get the better of her older brother, Ignatius.

“I’d be playing against him out in the back yard and we used to tear into it, we had no mercy for each other,” said O’Leary.

“Usually I would come in crying to Mom but she always said I was back out about ten seconds later because I wanted to go at him again. You would be going over to football training then and I would have absolutely no fear of playing with the boys.”

O’Leary came from a farming background, there were roughly 40 dairy cows and there was always a job that needed to be done.

That was another really positive influence on her growth, working in the farm before finally finishing up and playing out there too.

She knows the work-rate that inspired within her and while the dreaded stone picking might not have been the most enjoyable of outings, it definitely has her in a better place today.

“Farming was nearly more important than having a ball in your hand. There was no such thing as TV or video games, even though I’m not that old,” said O’Leary.

“Every chance we got, we were outside. We were either jumping on top of bales or over on the farm helping Mam and Dad out with the cows.

“There were plenty of times we spent the full day in the bog. You would have to run home to change into your football gear and you are out the gap again. It wasn’t even for training, it was actually games.

“You would be down in the field and picking the stones another time and that was actually the worst. Your back would be bent all day and your legs would be dead.

“I remember a club game, it was a county semi-final and we were playing our old rivals. We spent the full day picking stones in a field. I was nearly begging Dad to leave me go and rest up, he said he wouldn’t leave me go!

“So by the time it hit six o’clock, I had run back home, straight into the gear and run out the door again. It was a very tight game that evening. How I actually came out of it alive I don’t know!

“Definitely them days I would remember because at the end of the day, it only pushes you on. It only benefits you.”

And O’Leary has so much to show for that endeavour, she is entering her third year studying Health and Leisure at MTU in Tralee. She also works in Hotel Killarney and contributes on the farm to this day.

But everything will take a back seat today with an All-Ireland semi-final on the horizon, and Mayo waiting back at a happy hunting ground for O’Leary and her Kerry teammates.

The manner of their last visit to the Jones’ Road, and the phenomenal results since then, will give them plenty of confidence.

“Like our last couple of games, it’s one game at a time,” said O’Leary.

“We do believe that we are well capable of reaching an All-Ireland final. It was our aim at the start of the year. We really wanted to be in an All-Ireland final on 31 July. It was a good start to the year, obviously the League final made it better, but we’re not finished yet.”