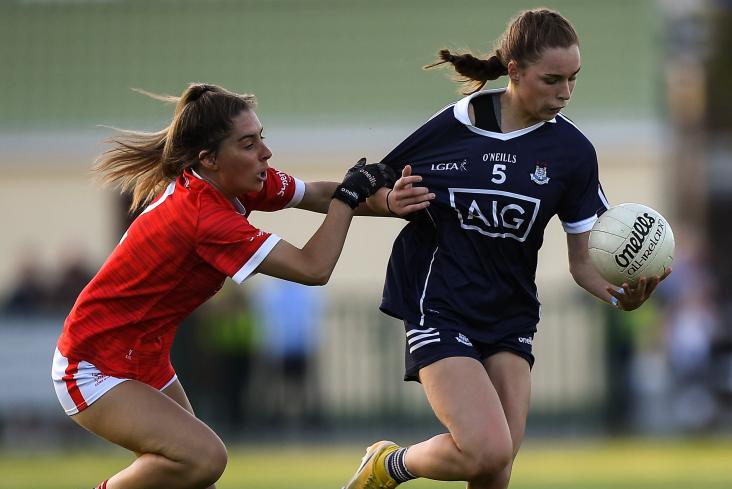 Elsa Kearney of Dublin in action against Amy McKennedy of Cork during the All-Ireland U16 A final at Cahir GAA Club, Co. Tipperary. Photo by George Tewkesbury/Sportsfile

Ellen Joyce hit 1-3 and Dublin were crowned All-Ireland U16 ‘A’ Ladies Football champions after extra-time in a superb game in Cahir.

Overall, they were deserving winners with Ellen Leddy Doyle and Siobhan Birnie also outstanding as they finally did enough to see off Cork.

Dublin had got off to the perfect start when they found the back of the net after just ten seconds. The ball was played forward from the throw-in and Joyce blasted past the Cork goalkeeper, Molly Murphy.

Cork could have had a goal of their own when Deirdre Cronin’s effort was well saved by Siobhan Cassidy-Fagan, before the same player pointed from a free, to make it 1-0 to 0-1 after five minutes. Cronin added two more to level it with eight minutes played.

But Cork were dealt another blow when Dublin got their second goal of the half, this time Joyce turning provider as she played Lucy Ahern in.

Eimear Kehoe scored too before Cork replied with a goal. Cronin played a great ball to Niamh O’Sullivan who made it 1-3 to 2-1 with 17 minutes gone.

However, Dublin failed to score for the rest of the half and with five minutes to half-time Méabh McGoldrick got Cork’s fourth point to see them level at the break, 2-1 to 1-4.

Brianna Smith put Cork in front, with Amy Sheppard and Aoibhinn O’Neill nudging them further ahead, before Dublin came roaring back.

Two points from Birnie, followed by a Kehoe effort had the sides level again. With 57 minutes gone it looked like Dublin had it won when Izzy Dowling got their third goal to make it 3-4 to 1-7, but the drama wasn’t over.

A minute later Cork were awarded a penalty when Grace Cronin was fouled and Aoibhe Daly coolly slotted home.

Cronin pointed from a free and with time running out it looked as if the Rebels had done enough, but Leddy Doyle got a late chance to equalise from a free and despite the pressure she made no mistake, to take it to extra-time.

The game had finished 3-5 to 2-8 after normal time, and Dublin were the better side on the resumption, with Joyce putting them back in front and two from Dowling increasing their lead. Leddy Doyle put four between the sides, before Eabha O’Donovan replied for Cork and by half-time it was 3-10 to 2-9.

Any chance of a Cork comeback was dashed in the 74th minute when Liadan Murphy scored Dublin’s fourth goal.

But the Munster outfit didn’t go down without a fight when they were awarded another penalty and O’Donovan scored the consolation.