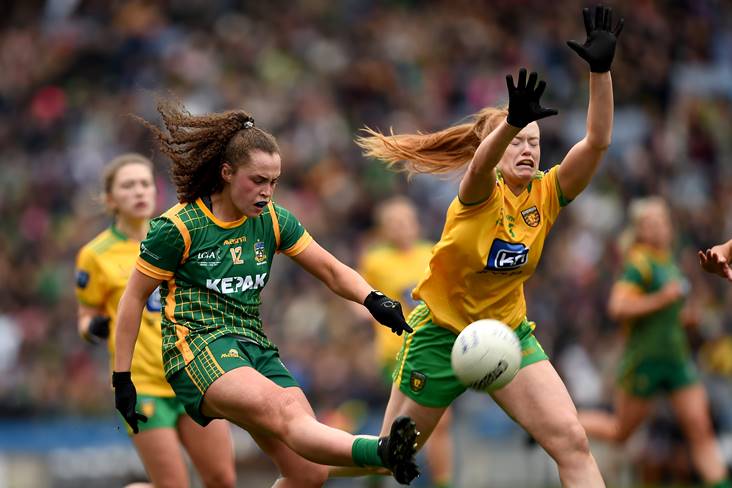 Eamonn Murray’s champions Meath have been pitted against Donegal in next Saturday’s mouth-watering TG4 All-Ireland SFC semi-final at Croke Park.

The glamour clash will be a repeat of this year’s Lidl NFL Division 1 Final between the counties, where Meath came out victorious.

Also at Croke Park next Saturday, Mayo and Kerry will battle it out for a place in the July 31 Final.

The semi-final pairings were decided on Saturday, as Meath got the better of Galway at O’Connor Park in Tullamore, and Donegal shocked last year’s beaten finalists, Dublin, at Páirc Seán Mac Diarmada, Carrick-on-Shannon.

On the other side of the draw, Kerry repeated their Lidl NFL Division 2 final victory over Armagh at O’Connor Park, while Mayo overcome Cork at Cusack Park, Ennis.

There was drama in the second part of the double-header live on TG4 on Saturday evening, where Meath left it until the final minute to strike the winner against Galway.

TG4 All-Star Emma Duggan scored the crucial point after her shot struck the crossbar and bounced over, for a thrilling 1-12 to 1-11 success.

Duggan also shot the first half goal and the reigning champions took a 1-3 to 0-5 lead at half-time. However, Galway came roaring back and Eva Noone scored their goal before they drew level only for one last point up the other end.

“We didn’t panic, with 20 seconds left it looked like a draw and it was going to extra-time, and we got the ball to the right person at the right time,” said Murray.

“We needed that tough game, we played Cork last year in the semi-final and that brought us on. This is the game that will bring us on leaps and bounds.”

Mick Bohan’s Dublin outfit had their sights set on a return to Croke Park too but Donegal had already beaten them in the Lidl NFL Division 1 semi-final and they scored the goals when it mattered once again in Carrick-on-Shannon.

Substitute Karen Guthrie came on to find the net twice while Yvonne Bonner added another goal with Carla Rowe scoring the Dublin consolation late on in a 3-7 to 1-7 defeat for the Dubs.

“We know Dublin well and we’ve come across them this last couple of years at the same stage here,” said Donegal captain Niamh McLaughlin.

“We got the tactics spot on, we stuck to the plan and we played for the 60 minutes, that was the main thing. We’ve a habit of letting other teams have their spell and we didn’t really let that happen.

“We knew that if we didn’t concede early, then we could keep it tight and worked the breaks well. I just knew from the work we had done we weren’t losing the game.”

The Kingdom also booked their place in the final four after a brilliant 4-12 to 2-14 win over a strong Armagh outfit.

Louise Ní Mhuircheartaigh continued her scoring exploits with 2-6 in Tullamore, while Niamh Carmody and Síofra O’Shea were also among the goals.

Aimee Mackin hit 0-11 for Armagh with their goals arriving courtesy of Niamh Coleman and Aoife McCoy. However, despite their brilliant 2022 form to-date, they were knocked out.

“It was just such an intense game from start to finish even the scoreline reflects that,” said Kerry star Lorraine Scanlon.

“We always knew Armagh were going to be a challenge, we knew it from the league final. We knew from watching their games in the group stages, that they always bring such talent to a game.

Mayo hit the ground running early in their game against Cork and Sinéad Walsh scored to put them in the ascendency. Lisa Cafferky added their second goal after half-time and Cork were left reeling on the back of a narrow 2-13 to 0-17 loss.

“We have been training very well since the Dublin game and we got a great start,” said Mayo manager Michael Moyles.

“There is massive belief in this squad but it always needs hard work as well. We got that today and the great start we got as well really helped us.

“We are delighted to get through and can now look forward to heading to Croke Park for the semi-final for what we know will be another tough game.”

Elsewhere in the Senior Championship, Monaghan were relegated to the Intermediate grade for 2023. Waterford won the relegation play-off between the counties at Bray Emmets on Saturday.

The Déise were too strong on this occasion and they secured their top tier status for next year following a big 3-12 to 0-6 win. Lauren McGregor (two) and Caoimhe McGrath scored their goals.

Aisling Murphy scored four goals as her brilliant season continued and Wexford secured a resounding 6-11 to 1-9 victory over Roscommon. Mo Nerney producing a stunning 1-14 in Laois’ 2-21 to 2-19 extra-time win against Clare.

And the Junior decider will feature Antrim and Fermanagh. Maria O’Neill scored 2-1 for Antrim in their 3-18 to 0-13 victory over Carlow. Fermanagh’s Eimear Smyth scored a hat-trick of goals to help her side through their semi-final, with another big 7-9 to 3-12 success at the expense of Limerick.