Ladies: McLaughlin key as Donegal battle past Waterford in Round 1 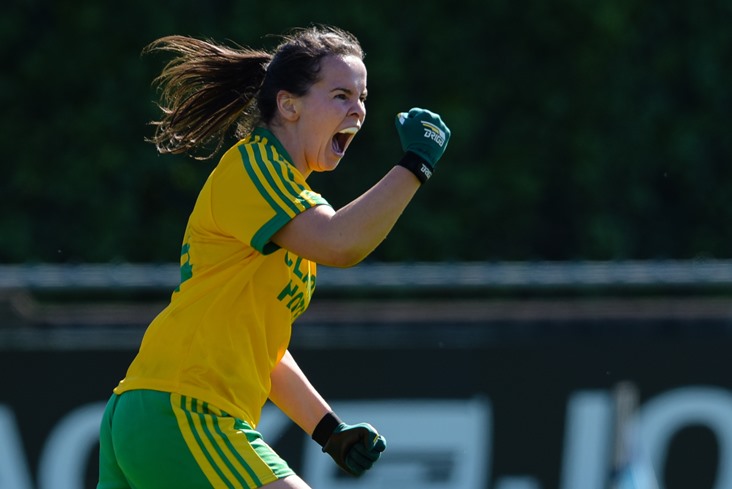 Geraldine McLaughlin scored 0-7 to help Donegal earn a hard fought win over Waterford in the opening round of the TG4 All-Ireland Senior Championship at a blustery Birr.

Maxi Curran’s side led by six points early in the second half but had to hold off a late rally from a determined Déise outfit. A goal from subtitute Aisling Mullaney left just one point between them entering the closing stages, before Yvonne Bonner sealed victory for Donegal.

On an afternoon of sunshine and showers, Hannah Power and Geraldine McLaughlin (free) traded early points. Lauren McGregor edged Waterford back in front as the Waterford blanket defence frustrated their opponents. Donegal full back Evelyn McGinley was sin-binned on 14 minutes for a trip on Annie Fitzgerald.

Despite the numerical disadvantage, Katy Herron levelled matters at 0-2 to 0-2. Geraldine McLaughlin’s second free put Donegal ahead for the first time on 22 minutes. The Ulster runners-up had a goal chance off Waterford’s short kickout but Megan Dunford cut out the danger.

Curran’s side led 0-3 to 0-2 after a cagey opening half. Waterford absorbed three minutes of Donegal pressure before Laura Mulcahy made a big catch on the edge of the square.

Geraldine McLaughlin tapped over another free three minutes into the second half. Waterford were then awarded a penalty as Katie Murray was pulled back after her sister Emma sent her through on goal. Kellyann Hogan fired the spot kick right and wide, however.

At the other end, Katie O’Hanlon saved a low shot from Geraldine McLaughlin. The TG4 All-Star attacker was fouled earlier in the move and converted her fourth free of the evening.

She added two more before substitute Susanne White scored from play to make it 0-8 to 0-2. Chloe Fennell then kicked Waterford’s first point in 33 minutes. Pat Sullivan made a double substitution and it worked straight away as Mullaney slipped the ball to the bottom corner.

Geraldine McLaughlin nearly caught out O’Hanlon with a lob but her shot landed over the bar instead of under. Points from Kate McGrath and Bríd McMaugh left just one between them with nine minutes left.

Nevertheless, Bonner nailed a point from 40 metres with six minutes left to get Donegal across the line after a close encounter.