Ladies: Grimes lands 0-8 as Meath prove too strong for Monaghan 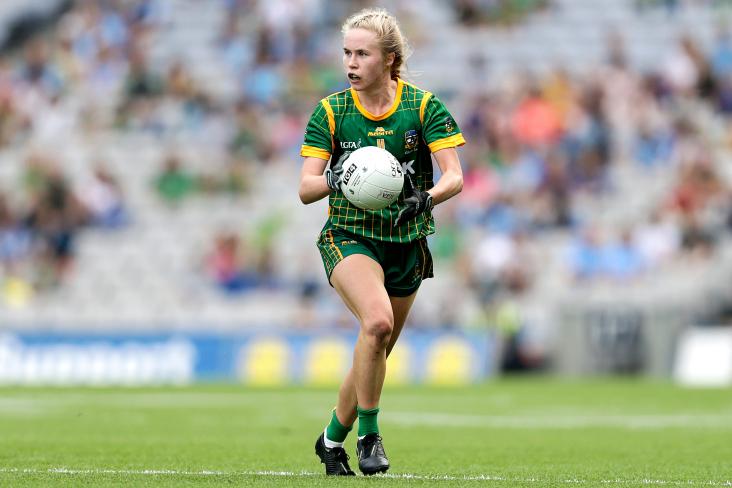 Stacey Grimes finished with 0-8 and reigning champions Meath made a winning start to Group B of the TG4 All-Ireland Senior Championship when they proved far too strong for a youthful Monaghan side.

It was a blustery Drumhowan and a goal late in the first half by Kelsey Nesbitt doubled Meath’s lead to six at that point, effectively putting them beyond reach.

After conceding the opening score early on, the visitors went on to hit 1-13 without reply. Meath’s greater ability to pierce holes in the opposition defence made the difference, while the stunning free-taking of Grimes saw the full-forward rack up a big personal tally.

With the teams setting up to almost mirror each other, both sides got numbers behind the ball in the first half, resulting in lengthy spells of possession as they slowly built the play up.

Monaghan would have been content with their start, which saw Laura Carey open the scoring, and the hosts restricted Meath to just a single point in the opening 12 minutes. Meath remained patient, however, and with Monaghan seeing Amy Garland sin-binned, points by Grimes (two), Emma Duggan and a fisted effort by Shauna Ennis moved the holders ahead.

And Meath made a key breakthrough when Nesbitt’s goal moved them 1-4 to 0-1 clear at half-time, having played into the breeze.

Meath started the second half with purpose, as a hat-trick of frees by Grimes and well-taken points from play by Duggan and Vikki Wall stretched their lead into double figures.

The one-way traffic continued, with Grimes increasing her tally from frees, including one excellent effort from the left wing, before Duggan wrapped up a commanding win for Eamonn Murray’s side.