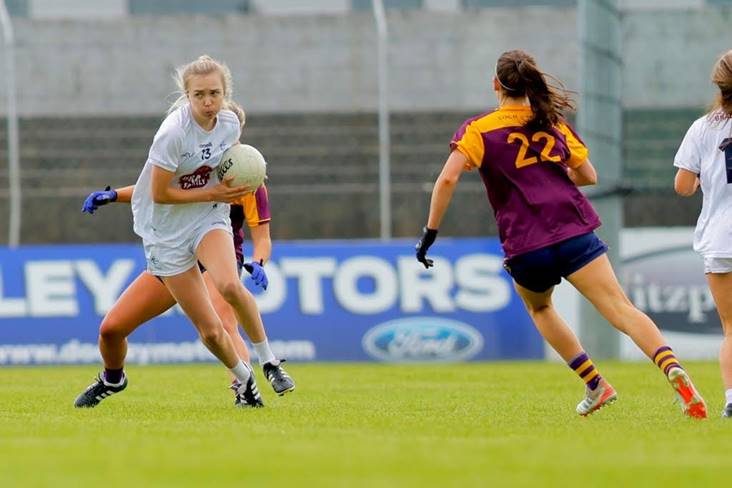 The dynamic duo of Lara Curran and Neasa Dooley shone at Netwatch Cullen Park on Sunday afternoon as Kildare secured the Leinster Ladies Intermediate Football Championship crown with a six-point triumph over Wexford.

Thanks to a combined haul of 2-5 from the prodigious attackers, the Lilywhites were able to hold off the claims of their hard-working Slaneyside counterparts. Team captain Grace Clifford also shook the net in the opening period and even though Tara Doyle (1-2) and Ciara Banville (0-2) did their best to keep them ticking over, Wexford ultimately couldn’t rein in the Kildare challenge.

The south-east women had come into this game on the back of a thrilling extra-time victory against Laois last weekend and opened the scoring courtesy of an Ellen O’Brien point in the third-minute. Kildare had coughed up possession on a number of occasions during a nervy start to the game, but they eventually settled with a score of their own by Dooley.

The Athy attacker helped herself to an impressive tally of 3-3 in the Lilywhites’ emphatic semi-final success at the expense of Offaly and she raised a green flag with 14 minutes gone in this contest. After she was hauled down inside the square, Dooley stepped up to the penalty spot for the second weekend running and slotted a low shot beyond the reach of Wexford custodian Sarah Merrigan.

Kildare stretched their lead to four points when Ciara Wheeler split the uprights off a patient move, before Wexford responded with quickfire contributions from Catriona Murray and midfielder Banville. Yet the Lilies were beginning to attack with confidence and created further daylight between the teams as the action progressed.

Moments after converting a close-range free, Curran released skipper Clifford for a superbly-struck goal in the 23rd-minute. While Wexford fired back with a Doyle point, Kildare brought a convincing 2-3 to 0-4 cushion into the interval.

The gap remained at five points following traded scores from Doyle and Curran on the resumption, but Wexford stormed back into contention on the third-quarter mark. Despite the temporary loss of Sarah Harding Kenny to the sin-bin, Banville’s second point of the game was supplemented by Doyle’s excellent solo goal on 45 minutes.

This suddenly cut the deficit to the bare minimum, only for Kildare to quickly reassert their authority with white flag contributions by Curran (free) and the ever-dangerous Dooley.

All of Curran’s scores had been from placed balls up to this point, but that changed in dramatic fashion with seven minutes remaining. After weaving her way through the Wexford defence, the Milltown ace smashed home a third Kildare major off the underside off the crossbar.

This left Wexford with a mountain to scale in the closing moments and while substitute Amy Wilson added her name to the scoresheet, a point from the industrious Aoife Rattigan put the seal on an accomplished Kildare win.