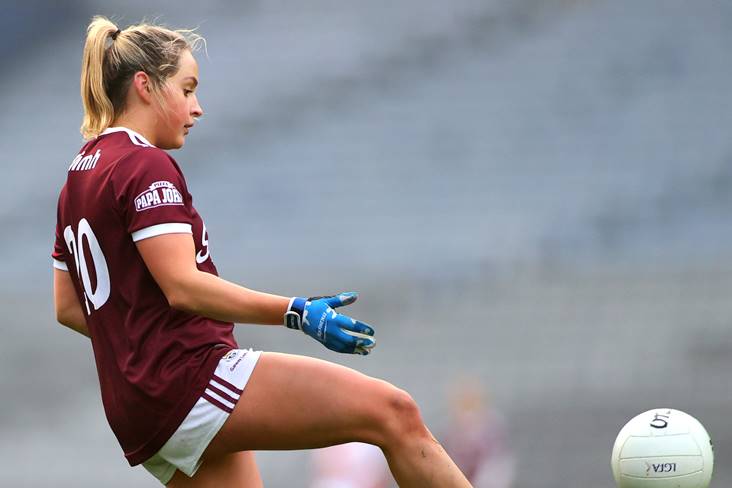 Substitute Lynsey Noone’s goal on 42 minutes proved crucial as it stretched the hosts’ advantage to seven points before Mayo rallied back into proceedings.

Noone’s goal was followed by top scorer Tracey Leonard from play to make it 1-10 to 1-5, before Michael Moyles’ Mayo were given a glimmer of hope when Éilis Ronayne and the returning Rachel Kearns set up Lisa Cafferky, who found the net.

It started Mayo’s best spell as Tamara O’Connor, Shauna Howley and Sinéad Cafferky brought the deficit back to two points with eight minutes remaining but that was as close as they got.

The Noone sisters were tremendous upon their second half introductions, with Lynsey having the biggest impact.  She took Kate Slevin’s pass for another point before winning a free which Leonard converted.

The first chance came for Galway on six minutes when Nicola Ward fisted wide but after Aisling Tarpey was punished straight after for a slow kick-out, Leonard split the posts to get the hosts off the mark.

Ailish Morrissey got Galway’s second on 17 minutes to commence a purple patch that was followed by Andrea Trill (two) and Leonard.

Lara Finnegan and Leonard increased Galway’s lead to 0-7 to 0-0 but not before Mayo’s first threat when Sarah Mulvihill’s low strike shaved the post.

At the other end, Galway threatened with Trill’s shot going across goal.  But eventually, the visitors got off the mark on 29 minutes when Howley tallied after Needham was brought down.  Needham got her score before the break leaving Mayo 0-7 to 0-2 down at half-time.

Howley and Tara Needham registered for Mayo after the restart but Shauna Molloy and Leonard cancelled them out before another Howley free reduced the deficit to 0-9 to 0-5 on 41 minutes.  But Noone’s goal after restored Galway’s cushion which proved enough at the finish.