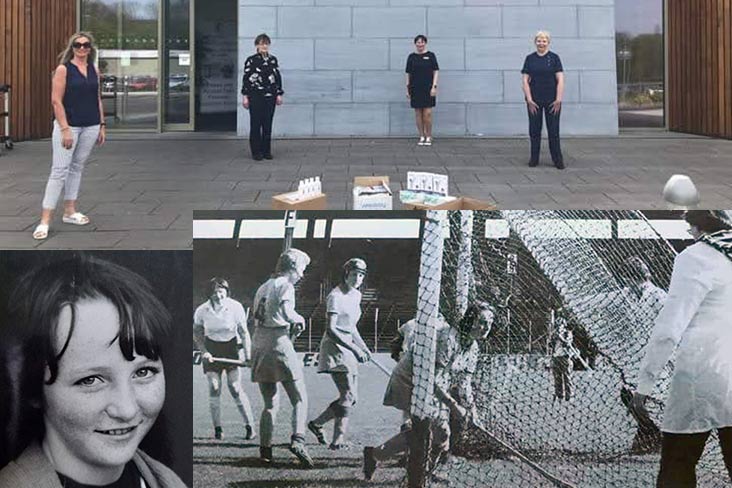 Pauline McCarthy (second from right) is pictured with her co-workers as Milford received PPE last year. Pauline scores a goal for Limerick against Wexford in the 1977 All-Ireland junior camogie final at Croke Park. As an 11-year-old Pauline was already playing at adult level for Ballybricken.

With a career spanning over 50 years, Pauline McCarthy hasn’t ruled out playing Ladies football and camogie for Limerick club St Ailbe’s past her 63rd birthday next November.

Her secret is Pilates - but also a bit of luck and plenty of hard work – and that combination has helped her to avoid serious injury and operate at the top level of inter-county action.

The now legendary Ballybricken native has also played soccer for a number of clubs, and rugby too, but she calls herself a camogie player playing football. And she has seen it all since her debut season as an 11-year-old for the local junior team.

“Back in the 1970s, when you were going to training, you had to listen to the trainer because they would tell you when the next night’s training was on, the time and where it was on,” said McCarthy.

“If you didn’t listen, you wouldn’t know. You didn’t get a text on WhatsApp and there was no WhatsApp group, there were no telephone calls to cancel matches either. You couldn’t cancel a match at the drop of a pin.

“There even used to be a lady here years ago and when they were arranging matches, they used to send a poster of the match that was coming up in a month’s time, and it had to be played because there was no way of cancelling it.

“You can actually see them not paying attention in the group at training when they are having a chat now. If the texts don’t come out you probably wouldn’t have anyone at training.”

Times have changed in the past half-century but McCarthy soldiered on through thick and thin.

She represented a Cork club and won two All-Irelands with them, mistakenly got called up to a Cork inter-county panel that only lasted for one match, and also wore Munster colours.

But she was Limerick through and through, she starred with the county’s footballers for a couple of years during the 1990s, while she began with the camogie team way back in 1974 and only finished up in 2005.

“When I was 11, I was playing corner-forward for Ballybricken,” said McCarthy.

“At the same time, I played U-14 football and hurling with the boys. I was the only girl playing. I was a freak altogether. It was frowned on for a girl to be playing, it was very unusual.

“I went on and won every county championship from my underage years, I had two U-16s, four U-18s and eight U-21s.

“With Ballyagran, I won five county championships, three Munster club championships and one All-Ireland club, all around that late ‘70s time.

“I’ve kept all the medals here in a press. Some are in a drawer, depends on whether I was playing or not. I have a lot, I have a good few of them outside in an outhouse with the rain coming down on them. But the important ones I keep in the house.”

It’s a fabulous career that will likely never be matched again but she continues to strive for more success and she scored 1-2 for St Ailbe’s in their Limerick Junior B Ladies football final victory over Dromcollogher-Broadford in Croom, one week after her 62nd birthday.

Then, on 11 December, she was back in the camogie county final when St Ailbe’s ran an impressive Doon side close, only to lose by four points in the end. Nevertheless, McCarthy hasn’t called time on her playing days just yet.

“Whenever they will start, I will go training again. It keeps me fit, I don’t have any medical conditions. I am on no medication or anything like that. It kept me healthy down through the years,” said McCarthy.

“I look after myself as well. I am at it long enough now to know a certain type of a tweak could develop into an injury. A different tweak could be just something you can run off. I am able to manage that myself.”

McCarthy was introduced to Pilates for the first time just six years ago and she has flourished thanks to the Reformer Pilates she attends under the instruction of Christian Fruergaard. She exercises at The Pilates Room in Castletroy, where Fruergaard is even trusted by the likes of the Munster Rugby players to help stave off injury and prolong their careers.

Pauline McCarthy with her St Ailbe’s teammates as they were crowned Limerick senior football champions in 2020.

McCarthy also credits Phyllis Dolan of the Castletroy Physiotherapy Clinic with her longevity.

However, even accounting for the expertise from the best Pilates instructors and physiotherapists that Limerick has to offer, she says it’s hard work that will keep you fit and healthy into the twilight years of your own playing career.

“It’s hard and you need to have good physical condition,” said McCarthy.

“A few years ago we started a Gaelic4Mothers&Others here in St Ailbe’s. They did their cruciates, calf muscles, quad muscles, fingers, everything. But an awful lot of them had never done anything physical.

“If you were thinking of doing football or camogie at the age of 40-something never having played or not having played in 20 years, you can’t just walk out onto the field because the young ones will kill you.

“Their strength, they have that much power that you don’t have. You have to have some sort of conditioning done.”

McCarthy has only begun to focus on optimising her physical condition in recent years and, away from the game, she has never been busier.

She is an IT Manager with Milford Care Centre and Covid-19 has transformed her working week. The constant battle with phishing scams is an added battle that the hospice, daycare and nursing home could do without.

They continue to strive to help the needy in the community, with the Limerick hurlers one of the major contributors to provide a helping hand thanks to some invaluable fundraising in recent years.

But the next big fundraiser is on Sunday 30 January, when the annual Milford Hospice 10km takes place.

“The 10k is all about fundraising and a lot of the staff take part. It’s a good day out and we get loads of support from the local people, they are absolutely fantastic,” said McCarthy.