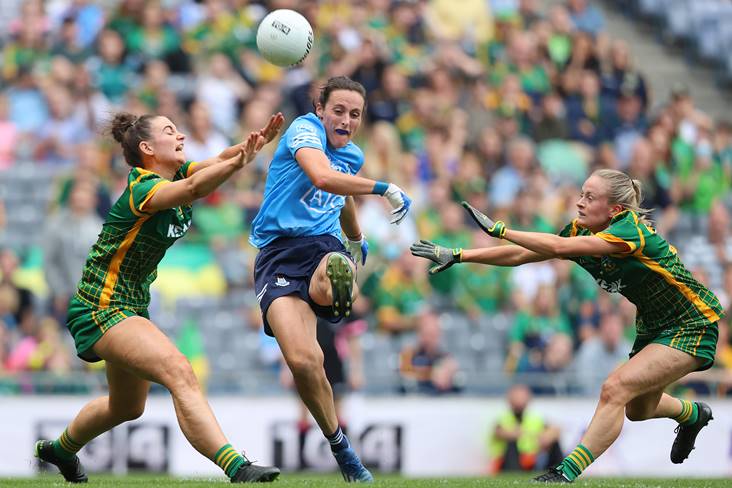 It was the culmination of an incredible journey for Eamonn Murray’s side who were Intermediate champions last year before claiming the Lidl National Football League Division 2 title earlier this year, and now the Brendan Martin Cup.

Eighteen-year-old Dunboyne full-forward Duggan landed the game's key score in a breath-taking first half where Meath overwhelmed the reigning champions and took a 1-8 to 0-6 advantage into the break.

Dublin tried to get back on terms in the second half but they couldn’t get close enough to reel in the Royals and their neighbours prevailed in one of the games of the year.

The four-in-a-row winners missed out on the chance to move within one of Cork’s record today but this was Meath’s day to celebrate with their massive support.

Vikki Wall started at midfield for Meath and her driving run led to the opening score in the first minute. She was fouled by Jennifer Dunne right after the throw-in and Stacey Grimes scored the resultant free. That run and score set the tone.

Meath’s next effort was crucial, and it came from the boot of the brilliant Duggan. She latched onto a Ciara Trant kick-out, looked up, spotted the goalkeeper off her line and her pin-point effort from distance crept under the crossbar over the back-pedalling goalkeeper.

All of a sudden, Meath held a 1-2 to 0-1 lead and corner-back Emma Troy got forward to cancel out Hannah Tyrrell’s free.

But this Dublin side had already been tested early in big matches this year and Martha Byrne scored a brilliant point in the 12th minute, Tyrrell added another and it looked like Dublin would ease their way back.

Nevertheless, Bridgetta Lynch grabbed the final point before the water break and Meath were 1-4 to 0-4 as everyone drew breath after the pulsating start.

Tyrrell tapped over another free but she should have found the net in the 19th minute when Aherne gave the pass and Monica McGuirk saved brilliantly from close range.

Grimes and O’Sullivan extended the lead and Mary Kate Lynch’s last-ditch block prevented a certain goal when Niamh Hertherton was presented with the opportunity.

Troy and Duggan scored two more outstanding points either side of Tyrrell’s fourth of the day and Meath took a deserved 1-8 to 0-6 lead into half-time.

Tyrrell was on target again at the start of the second half but that was the only score for 11 minutes as both sides tried to wrestle control of the encounter.

With nerves appearing, Carla Rowe’s huge point in the 43rd minute gave Dublin real hope and they only trailed by a goal.

But just like they did in the first half, Meath scored just before the water break and Grimes’ third point left them with a 1-9 to 0-8 lead heading into the final quarter.

And Meath remained in the ascendency when Duggan popped up to send another point over her left shoulder.

Second-half substitute Kate Sullivan hit back and Tyrrell was in the right place to deliver again, and leave the game perfectly poised, 1-10 to 0-10, with ten minutes remaining.

Lyndsey Davey closed the gap further but O’Sullivan had the answer for Meath and they held on despite Tyrrell’s seventh point and a frantic finish.