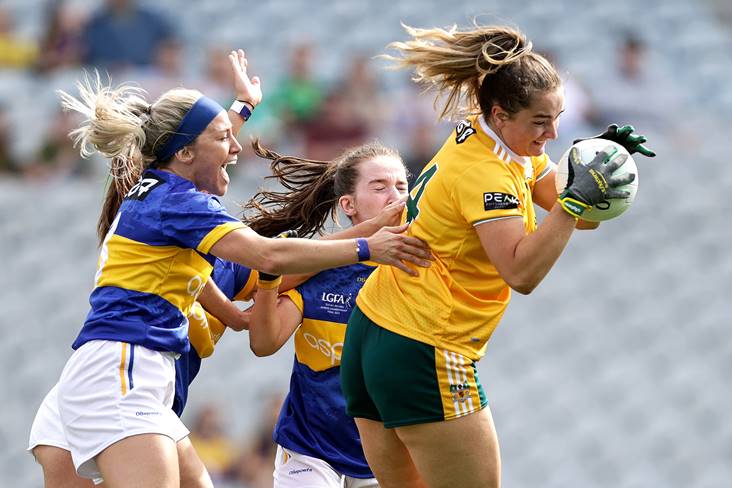 Mark Murnaghan’s side lost the 2020 decider to Fermanagh at Parnell Park but back in Croke Park they regained their Intermediate status after a stylish victory.

Wicklow were already well on the way by half-time when they took a 0-10 to 0-3 lead into the break and after the restart Clodagh Fox scored the first goal. Gráinne McLaughlin hit back for Antrim but Deeney immediately killed off the revival.

Wicklow took the lead in the fourth minute when Deeney scored, and the Leinster outfit continued to pile on the pressure. Deeney doubled her tally and Catherine Dempsey got in on the act when Wicklow could have had a goal.

Top-scorer Marie Kealy scored her first point from a free in the tenth minute, and after an heroic block by Wicklow captain Sarah Jane Winders down the other end, Kealy tapped over another.

Antrim looked in real trouble as they trailed by 0-6 to 0-0 after 11 minutes but they got their first point moments later when McLaughlin fired over from the ground.

Wicklow held that five-point advantage up to the first water break and Dempsey extended it with her second score.

Antrim started to provide more of a threat up front and their attack was spear-headed by McLaughlin. She scored a couple of points either side of another Fox effort.

Fox and Kealy combined to bring Wicklow’s tally into double-digits and the deserved to be seven points clear at the interval.

Antrim needed to start fast in the second half but instead Wicklow found the net through Fox in the 31st minute. She got through Áine Tubridy’s tackle and finished high past Anna McCann.

Moments later Maeve Blaney stopped Deeney’s goal-bound effort on the line but Wicklow continued to drive forward, and when Laurie Ahern scored in the 43rd minute all six of the starting Wicklow forwards had contributed to the scoreboard.

They were 1-15 to 0-5 ahead at the second water break only for McLaughlin to score a stunning goal in the 52nd minute when she rocketed a shot low to Linda Dempsey’s bottom left corner.

However one minute later Deeney put the game beyond doubt when she scrambled the ball over the line, and after McLaughlin’s later penalty cleared the Wicklow crossbar, the Leinster side cruised to victory.