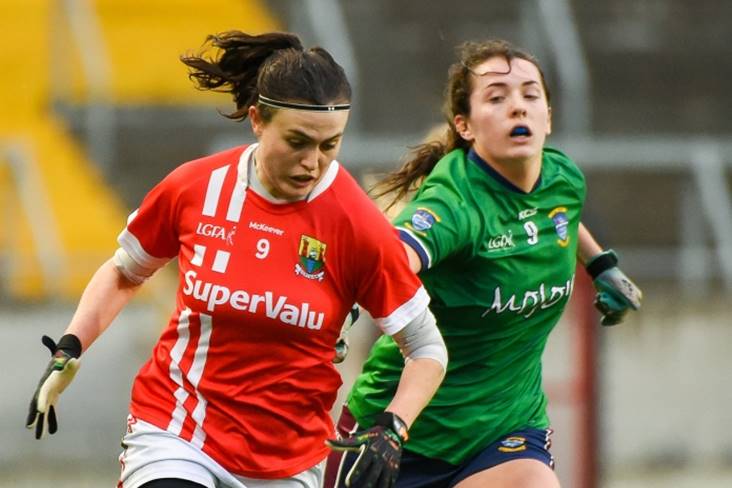 Hannah Looney of Cork in action against Vicky Carr of Westmeath during the 2020 Lidl Ladies National Football League Division 1 Round 1 match between Cork and Westmeath at Páirc Ui Chaoimh in Cork. Photo by Eóin Noonan/Sportsfile.

Martha Byrne, Aoife Kane, Leah Caffrey, Siobhan McGrath, Jennifer Dunne, Lyndsey Davey and captain Sinead Aherne all started against Cork as Dublin claimed a fourth successive All-Ireland crown – and they’ll line out from the start against the Déise in what is a championship dress rehearsal.

Last evening’s TG4 All-Ireland Championship draw pitted Dublin and Waterford together in the same pool for a third successive year but before all of that, both counties will look to make an impact in the League.

Goalkeeper Abby Sheils is named between the sticks for a Dublin Senior debut, rugby international Hannah Tyrell is named on the bench, while hockey international Sinéad Loughran is another notable inclusion among the list of replacements.

Visitors Waterford have dead-ball specialist Maria Delahunty back in the fold, with Ballymacarbry’s Mairead Wall named as captain.

The weekend’s action gets underway this evening (Friday) as Cork host Tipperary in what is another Championship dress rehearsal.

The Munster rivals meet at Páirc Uí Chaoimh at 7.30pm (live on TG4), also in Division 1B, after being pulled out of the hat together for the forthcoming TG4 All-Ireland Championship.

Cork have nine All-Ireland Final survivors in their starting line-up, with former All Star defender Emma Spillane back in the fold after a year out.

Former All Star Fiona McHale, who’s been absent since 2018, is back at midfield for Mayo, as new boss Michael Moyles gears up for his first game in charge.

Éilis Ronayne is named as captain for this all-Connacht clash, as Mairead Seoighe skippers visitors Galway for this Division 1A tussle.

Also on Sunday, and in Division 1A, Donegal welcome Westmeath to Ballybofey.