'I look at how Stephen Cluxton operates' 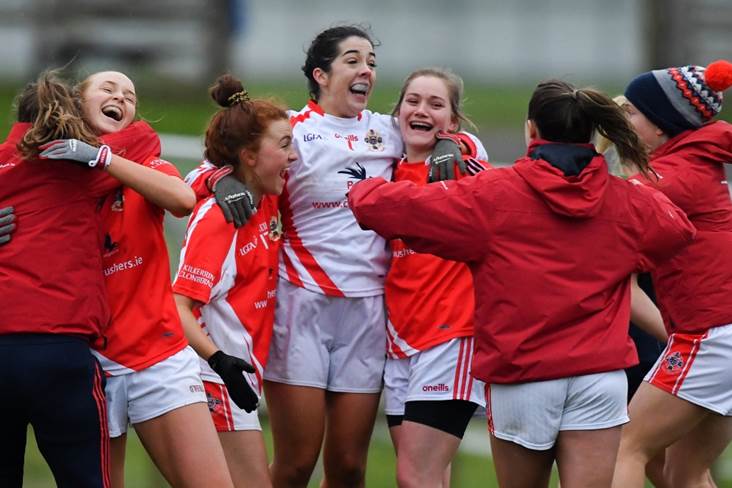 Team selector Áine Gormally played alongside Murphy in that schools’ win, and the ’keeper’s sole brief that day was to keep the dangerous St Mary’s Mallow attackers at bay.

A decade later, at the Gaelic Grounds, she has the exact same job as Mourneabbey quartet Dioreann O’Sullivan, Máire O’Callaghan, Niamh O’Sullivan and Bríd O’Sullivan don their club jersey this time.

Last year they had an unofficial reunion in the All-Ireland Senior Club Semi-Final in Clonberne, where Mourneabbey emerged victorious, thanks largely to eight points from Doireann O’Sullivan, while in her Galway shirt Murphy again lost out to Cork and the Mourneabbey contingent in this year’s Lidl National League Division 1 decider.

There were huge hopes that 2018 would be the year that Kilkerrin/Clonberne broke through and won their first All-Ireland Senior Club title, but their in-form Cork opponents marched on to ultimate All-Ireland glory.

“I think to be honest that was one of the hardest losses for us to take especially it happening in our home ground. We had so much support out for it and there was so much optimism for the game,” said Murphy, who works as an Assistant Reception Manager with the Connacht Hotel.

“We really thought that was our year. We were well set up, maybe we were being naive going into it, I’m not sure, but I think the loss in that game definitely stood to us this year. There is more of a killer instinct in us.

“We have shown that against Carnacon and Foxrock-Cabinteely and we are punishing mistakes. We are not willing to give it up now. That defeat and that hurt has driven that into us. You carry it with you. We are so focused on what we need to do and that will to win is there.”

It has already been a week of honour for the Galway club. Twin sisters Louise and Nicola Ward won their first All Star awards last weekend at the TG4 Ladies Football awards banquet, which delighted everyone involved in the club and county scene. Murphy and fellow county star Olivia Divilly were also nominated for the awards and just being mentioned among the elite in the country was a massive thrill for the 26-year-old stopper.

“For me and Olivia – I think I can speak for us both – it was brilliant to be recognised as being up there with the best. That’s what you strive to become from such a young age. It was a bit surreal, but personally it was such an achievement to get there and we were delighted with that.

“For our families it was a big deal. It was a first nomination for me but it was brilliant that the two girls got their award. It is such a boost for us, the two of them they are so deserving of it, they put so much efforts in, not just this year but since they started playing. That has given us a real lift for Saturday.”

Murphy was pointed towards the goals by current team mentor Sean Boyle when she played at U-12 grade – “He saw I had a good kick and a voice on me,” – and after a stint playing for the boys’ team, her skill level developed quickly, something that she has consistently tried to do.

“When I first began it was more about booting the ball out the pitch, but now you are basically a 15th outfield player. A lot of possession comes back to the goalie and you have to be able to pass it round. Short kickouts are a huge thing too.

“I look at how Stephen Cluxton operates, I know he plays the men’s game but his kickouts are what you aspire to. He always gets such a high percentage of his kickouts on target.

“Martina O’Brien from Cork, she is really good as well. I always look at her, she is a real leader on the pitch. You aspire to be like that. If you can organise your backs and keep them focused it’s half the battle. You have to keep everyone else on their toes a well as yourself.”

This will be the third All-Ireland final that Murphy and her county colleagues will have played this year. The Lidl league and TG4 All-Ireland finals have come and gone without reward, which has ignited her hunger to succeed for the parish side.

“I do think this year more than any year, a lot of extra work was put in behind the scenes. The girls trained really hard while we were away with the county. It was great to come back and see everyone flying fit.

“The All-Ireland was tough but coming back and seeing how good the club was doing made that transition so much easier. The club set up with Kevin (Reidy) and all the rest of them it is really like a county set up. It is brilliant to come back into that standard.”

Less than four miles separates the villages of Kilkerrin and Clonberne and in between there are not many electricity poles and gates that are not togged out in the red and white. Victory tomorrow (SUNDAY) would mean so much.

“I think winning at the weekend would make most of our lives, which is crazy to say. For all of us, all 32 of us on the panel and management, we really all are looking at the one prize. For everyone one of us it means so much.

“There are girls there as well, Lisa Gannon, Ann Marie Finnerty, they are expecting in the next few weeks and for them it’s massive as well. For those players that aren’t playing this year, we are going it for them as well.

“It’s a huge thing for the community and I hope to God we can do it.”