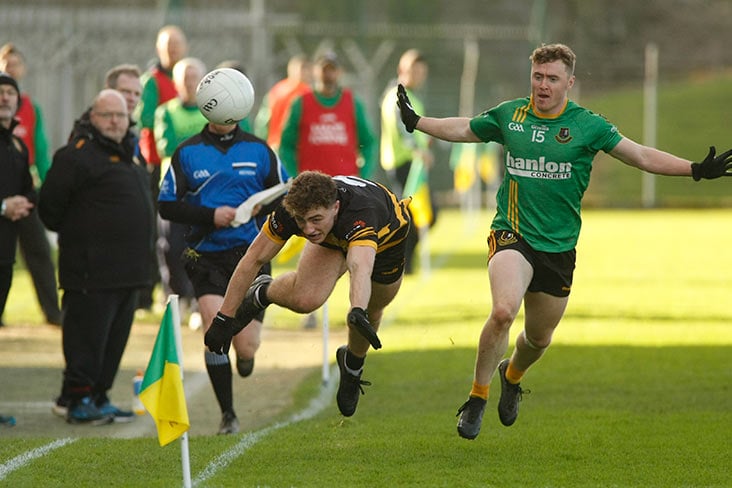 Two goals around the mid-point of the second-half at Pairc Tailteann on Saturday set Dunshaughlin up for a 'home' provincial semi-final spot.

It took Dunshaughlin a while to find their shooting boots. It was only in the second half - when playing into the sun and the diminishing wind that Richie Kealy's side took control.

With the sides tied at 0-6-each at half-time, Dunshaughlin appeared to be in a spot of bother. However, the effort expended when playing into the elements seemed to exhaust the Kildare-team who were heavily dependent on Jimmy Hyland for scores..

Dunshaughlin's reward is a 'home' semi-final against Cooley Kickhams (Louth) in two weeks time. Their superior athleticism saw the Meath IFC winners outscore the visitors by 2-13 to 0-4 in the second-half.

Half-time sub Aaron Murphy made a notable contribution for Dunshaughlin with four points (all bar one from play).

A major breakthrough arrived for Dunshaughlin when Niall Murphy's delivery was finished to the net, at the old swimming pool end, by midfielder Conor Gray.  That left it 1-11 to 0-9 with 43 minutes gone.

Dunshaughlin wasted no time to increase their advantage. Aaron Murphy turned provider for John McDonagh to fire home his side's second goal, in the 47th minute, to leave Richie Kealy's side ahead by double scores, 2-12 to 0-9.

Dunshaughlin finished with nine different scorers with goalkeeper Adam McDermott wrapping up the scoring with a stoppage time 45.

Two well-turned out teams produced a gripping contest that enthused both sets of supporters until the Meath side eased clear. Wind-assisted Dunshaughlin sprung from the traps through Conor Gray and Ben Duggan and were rewarded with a free that Luke Mitchell pointed.

Dunshaughlin's first-half highlight was Niall Murphy's seventh minute effort deftly chipped over from 45 metres that left the Meath men 0-2 to 0-1 ahead.

Operating with 12 men behind the ball playing into the wind, Ballyteague frequently causing problems - especially Fionn Murphy in attack -  for Dunshaughlin who were let down in front of the posts. By half-time their wide count was six while the Kildare side's first miss came from Cian Loughlin's 30th minute mark attempt.

Dunshaughlin had team captain Niall Murphy black-carded in first-half stoppage time. By the time the number six returned the team in black and amber were 0-10 to 0-9 ahead.

Over the final third of the hour, Dunshaughlin outscored the visitors - who had full-back David Randles sent off late on - by 2-9 to 0-2.