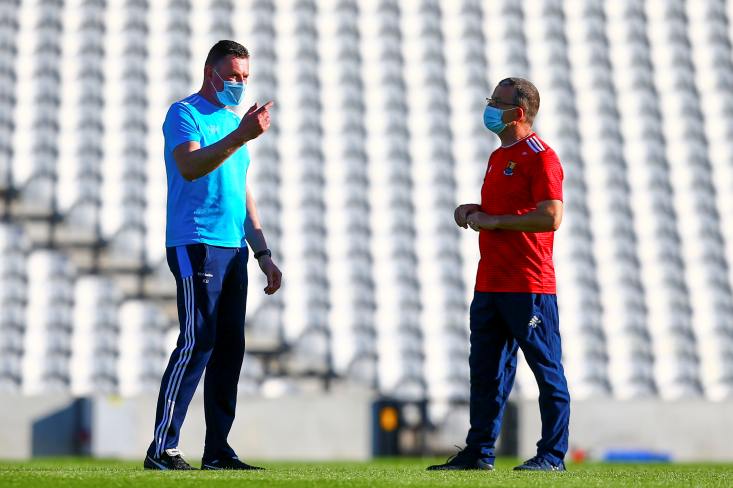 Cork manager Ephie Fitzgerald said he is looking forward to getting back to Croke Park after they booked a place in the Lidl National Football League final against All-Ireland champions Dublin with a 5-10 to 3-13 win over Donegal.

“We got a couple of goals at crucial times and I delighted with the way we responded when they came back at us. We made a few changes at half-time and they worked out for us,” said Fitzgerald.

Cork shot 2-2 in the opening four minutes with goals from Brid and Ciara O’Sullivan and Maire O’Callaghan also found the net, but they were level at 3-5 apiece after two goals from Karen Guthrie and one from Kay Herron kept Donegal in contention. Second half goals from Orla Finn and Sadhbh O’Leary were decisive for Cork.

Donegal manager Maxi Curran was pleased with his side’s attitude even if the result didn’t go their way.

“We gave away a few soft goals but that game will do us a lot of good ahead of championship. We have Cavan in the Ulster championship in next few weeks so we will turn our attention to that now,” said Curran.

Dublin saw off Mayo’s challenge at LIT Gaelic Grounds in Limerick by 4-15 to 0-10 with Sinead Aherne getting two goals and Niamh Hetherton and Jennifer Dunne also finding the net and manager Mick Bohan is really looking forward to the league final.

“Dublin have only been in one final which is surprising for a county of our size. We're delighted to be back in Croke Park in a league final. It's an opportunity for families to come out and see them play.

“We're delighted to have put up such a big score. It didn't feel like there was so much between us because they left a lot of handy scores out there,” said Bohan.

Mayo, who trailed by 3-3 to 0-4 at the break, were unable to get in for a goal which might have ignited a comeback, but manager Michael Moyles said they need to stop conceding so many goals.

“The last few seasons, Mayo have been conceding too many goals and we're working towards a system to improve that.

I don't think there's any magic dust we can come up with to immediately change that. It will just take time,” said Moyles.

Meanwhile, Tipperary suffered relegation to Division 2 for the 2022 campaign, after losing out to Westmeath by 2-16 to 2-10 in the Division 1 relegation play-off in Banagher.

Westmeath led by 0-10 to 0-13 at the break but Tipperary rallied and goals from Roisin Horward and Angela McGuigan edged them in front in the second half.

But Westmeath finished strongly and secured their top flight status with late goals from Lucy McCartan and Karen Hegarty.

It’s a massive win for us because it’s our first one of the year, we stay in Division One and now we can reboot for the championship,” said manager Sean Finnegan. “We are just delighted to get out of here with a win, it was never going to be a kick of a ball between us.”

“It was a great battle, two really hungry teams,” said Tipperary manager Declan Carr. “We will turn to the championship now, move forward, more work and keep at it until we get it right.”

Elsewhere, it’ll be Kerry against Meath in the Division 2 Final, which is also fixed for Croke Park on Saturday, June 26.

Kerry and Monaghan finished level at 1-8 apiece and were still deadlocked at 2-11 to Monaghan to Kerry’s 1-14 at the end of extra-time before Danielle O’Leary secured a 4-3 win for Kerry in a shootout.

Meath and Cavan were level at 0-5 apiece at half-time but Emma Duggan led the way after the restart as Meath pushed on for a 0-13 to 0-8 win.

Meanwhile, Kildare will meet Laois in the Division 3 final and Leitrim will take on Louth in the Division 4 final. Both games will take place on Sunday, June 27 with venues and times to be decided in due course.

Next Sunday, Tyrone will play Wexford in a Division 2 relegation play-off, while Fermanagh and Wicklow will battle it out for Division 3 survival, in what is a repeat of the 2020 TG4 All-Ireland Junior decider.