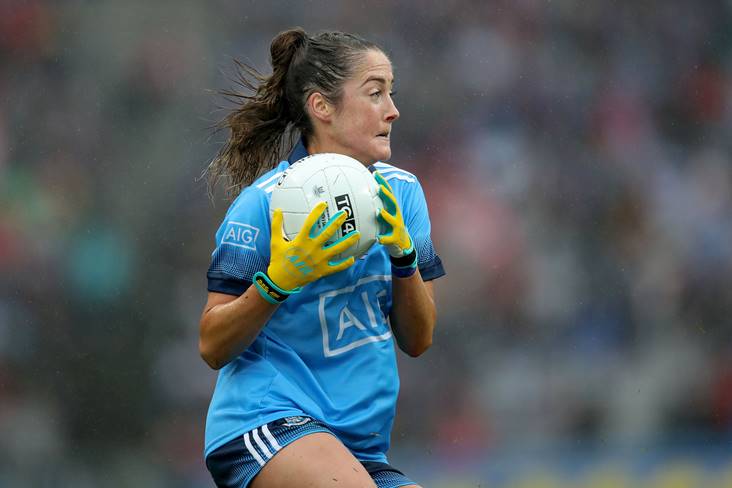 It wasn’t the hat-trick of goals or even the provincial silverware alongside her beloved teammates that meant the most to Éabha Rutledge.

Just being able to play a competitive game without experiencing a headache in the aftermath was the best takeaway of all.

Her return from concussion has been lengthy, more lengthy than she could ever have imagined after an initial bang to the head during a club game with Dublin’s Kilmacud Crokes two years ago.

That started the wheels in motion, a time where she would be forced to mature and grow, and be conscious that she had to help herself, too.

She missed training sessions, matches, and entire seasons, all in the hope that one day she would be out on the football pitch playing at the top level again. And following a 4-15 to 0-8 victory over Tinahely, the Crokes ace was thrilled to be back.

“It was just amazing,” said Rutledge.

“And to go on there and to win the Leinster championship on Sunday, honestly, it's like the most incredible feeling. There’s just no better feeling than winning with your club and the players you’ve grown up playing with. It’s just amazing.”

The 26-year-old plays up front for the Stillorgan outfit but has operated in defence during her Dublin career.

Rutledge was a real inter-county star too but hasn’t featured as prominently since her concussion troubles began and she is taking her time before she makes a call on inter-county career.

She has learned patience in the most difficult circumstances, and even Dublin senior manager Mick Bohan’s call may have to go unanswered if the time isn’t right.

“I’m not too sure, at the minute I kind of just said, I’m enjoying where I’m going with the club,” said Rutledge.

“And obviously with the concussions it was great to be able to be playing so many matches and to be getting back with Crokes this year. So, I kind of said I will wait and see with the club.

“The club keeps going too, it’s never-ending which is great. But I haven’t even thought past the next match.”

She was a TG4 All-Star nominee that year but missed out on the gong, although the Dubs dominated again, claiming seven in all.

One year later, Rutledge’s concussion nightmare had well and truly begun as she won another All-Ireland crown, however this time as part of the extended panel.

Her symptoms were deteriorating as she received a third blow to the head and despite being able to partake in light training, when the intensity was upped a notch, the ‘invisible injury’ took its toll.

“I was very fortunate at the time, Mick Bohan and the Dublin management team, and the physios and doctors were great. They really looked after me,” said Rutledge.

“I was with a consultant and a professor out in Beaumont, who was absolutely brilliant, Professor Dan Healy. He did a few different things. He injected Botox into my head and into my neck to kind of relax the muscles to help.

“He says it’s quite common for patients who suffer migraines that they would get this Botox in to relax their muscles. So, between that and different medications, then I worked with Santry Sports Clinic in terms of strengthening my neck and doing different exercises to release my back and my neck.

“I did acupuncture, went to a chiropractor, a physio, you name it, I tried it all anything to try and help and thankfully it did, which is great.”

She notes that her headaches didn’t deliver a migraine-style punch, it was more the constant nature of the pain that made it agonising but the combination of Botox and medication helped to stem the flow.

Rutledge was starting to see improvements, but it was a precautionary tale and she had to respect the issues that had taken football away from her. There was no racing to get back out on the field.

“I think that was one of the hardest things for me was that, obviously, when you go to training and you want to be playing, you know, if it is like a hamstring tear or something like that, you can be doing rehab,” said Rutledge.

“As footballers, we just want to be doing something to be making it better. But obviously, with concussion, they’re always saying do nothing, rest is most important. There is a different rehab that you can be doing in terms of the stretches and the exercises that I got from Santry.

“At the start, it was tough, because you felt like you couldn’t do anything to help. And then you're like, when will I ever get back? When will I ever be able to do what they’re doing?

“So that was kind of something that I struggled with a lot. And in the sense of, if you had a hamstring injury, like I said, you’d be limping around and people can see that, but no one can see an injury to the head, no one knows really what’s going on.

“Sometimes you’re like ‘God is it really in my head, what is going on?’ I was really fortunate with the teammates and the support I got from management.”

Rutledge bided her time and while she was growing her new Great Grip Gloves business, one where she is currently seeking a fabric for wet weather too, she continued to work as a fund accountant at JP Morgan.

She learned her sporting lessons through trial and error, took her time and finally her plans came to fruition. The corner has been turned and alongside the rest of the Kilmacud Crokes team, there could very well be currentaccount.ie All-Ireland honours on the horizon.

“When the club went back this year, back in February, they started about training and I just spoke to Paddy, my manager, and I said, there’s no point me going in hell for leather now training, and getting the symptoms straight back again,” said Rutledge.

“So, we kind of worked at just a little non-contact at the start. Literally just started off doing a few runs, kicking a few scores and stuff, but it was nearly in May when I played my first match, or played the first ten minutes in a first half.

“But there were a lot of matches and we got through the summer and up to now, headache-free, which is great. It’s fantastic.”