Leinster U20HC: Wins for Dublin, Laois and Offaly on eve of lockdown 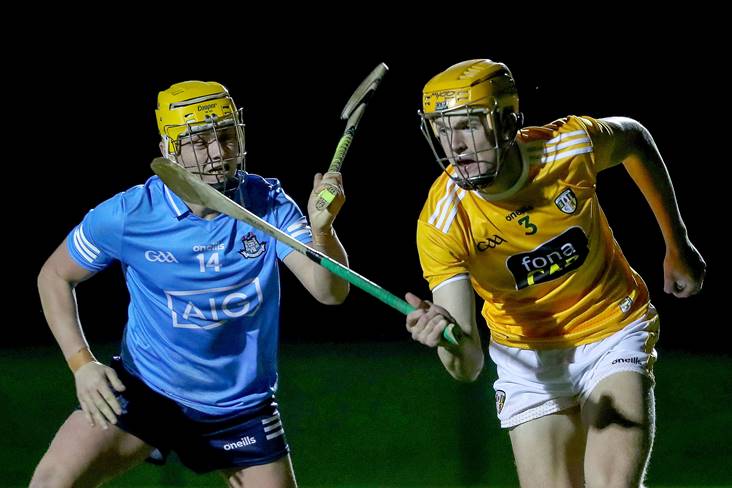 Dublin, Offaly and Laois booked opening round wins in the Leinster U20 hurling championship this evening but the competition must now be put on hold until after the Level 5 Covid-19 restrictions are lifted.

The GAA have had to hit the pause button in their efforts to complete the U20 and minor inter-county championships after it was confirmed earlier today by the Government that only inter-county senior matches can proceed during the increased lockdown measures which come into effect in Ireland for six weeks from midnight tonight.

At the Louth Centre of Excellence in Darver, Dublin's firepower proved too much for Antrim to handle in the second half as Paul O'Brien's side ran out winners by 2-22 to 1-8.

After beating Down by 13 points to qualify for this stage, Antrim were just four adrift at the break (1-8 to 1-4) with Daire Murphy' goal getting the Saffrons back to within touching distance.

Goalkeeper Eddie Gibbons was handed penalty taking duties for Dublin and made no mistake from the spot for the game's opening goal on 22 minutes and they outscored their challengers 1-10 to 0-0 in a 20 minute spell on the restart. Substitute Kevin Desmond's major effectively put the result to bed.

They will be hoping to exact revenge for last year's quarter-final defeat against Offaly with the two sides set to meet at the same juncture again after the Faithful County dished out a 2-22 to 3-9 beating to Westmeath at the Faithful Fields despite the loss of three influential players due to Covid-19 protocols.

Westmeath netted a brace of goals in the first half through Danny McGrath and Rory Keyes (penalty) while Luke O'Connor replied at the other end to ensure Offaly of a 1-11 to 2-5 half time lead but it was mostly one way traffic thereafter as they home team took control of proceedings in Kilcormac. Cathal Kiely finished with 0-12 for the winners and Cathal O'Meara grabbed their second goal before substitute Matthew Cunningham pulled one back for the Lake County.

It was closer at MW Hire O'Moore Park where a goal by Mark Hennessy 18 minutes into the second half ended up being the difference as Laois defeated Carlow, 1-15 to 0-15. Carlow had led 0-8 to 0-7 at the interval.