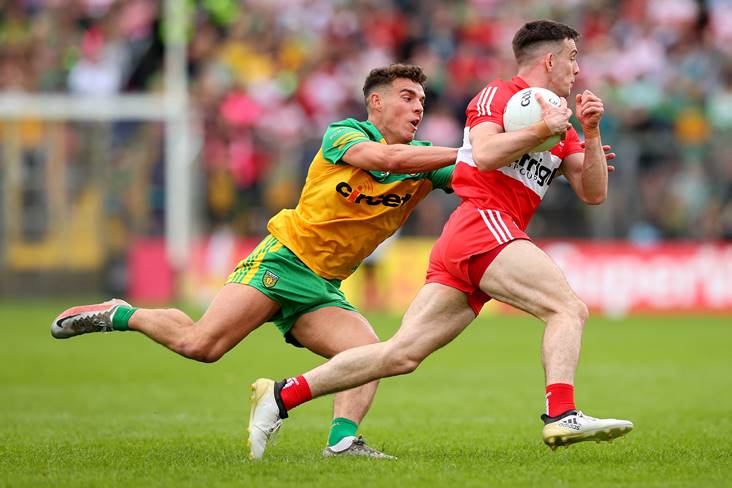 Derry bridged a 24-year gap to their last Ulster SFC success when outstaying Donegal to prevail by 1-16 to 1-14 after extra-time in a tight and tense final at St Tiernach's Park in Clones.

Rory Gallagher's side certainly had to do it the hard way to lift the Anglo-Celt Cup, having also beaten holders and All-Ireland champions Tyrone, and then Monaghan in the semi-final.

The game looked destined for an historic penalty shoot-out until points from man-of-the-match Brendan Rogers and ace midfielder Conor Glass in the 88th and 90th minutes, respectively, sandwiched in between one for Donegal by Ciaran Thompson finally decided the outcome.

Trailing by two points, the Tir Chonaill men had a late opportunity to snatch victory with what was the last kick of the game, but Michael Murphy's free from 14 metres was kept out by the Derry men guarding the line before referee Sean Hurson blew the final whistle much to the sheer delight of the Oak Leaf County's supporters.

The sides were deadlocked on 1-12 apiece at full-time, a brace of Shane McGuigan points, one from play and one a free, brought Derry level after a long-range Murphy effort sent a Jason McGee special had Donegal two in front, while Glass had a late chance to win it but his effort was off target.

At half-time in extra-time, the teams were still inseparable at 1-13 each, Donegal's Aaron Doherty swapped points with fellow substitute Emmet Bradley, who was replaced by Niall Toner before throw-in.

The Oak Leafers were looking good going into the break of regular time, leading by 1-6 to 0-6, with Niall Loughlin netting the game's opening goal in the 11th minute after good work from Ethan Doherty and Toner.

That had given them a 1-3 to 0-1 lead, but Donegal clawed their way back into the contest with three Peadar Mogan points and Odhran McFadden-Ferry's goal within a minute of the restart had Declan Bonner's charges on level terms.