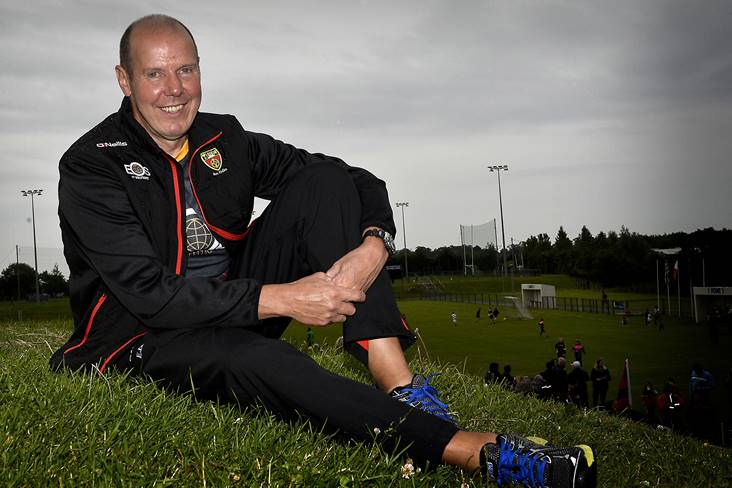 Down GAA, and the wider GAA community, has been plunged into a state of shock following the sudden and untimely passing of two-time All-Ireland winner and former manager Eamonn Burns.

As a player, he will always be remembered for his contribution to the memorable Sam Maguire Cup successes under Pete McGrath.

Three years later he wore the number 5 jersey as Dublin were overcome on a scoreline of 1-12 to 0-13.

A teacher in Newcastle, he got his first taste of senior inter-county management as a selector under his All-Ireland winning team-mate James McCartan in 2013 and ’14.

The Ulster final appearance of 2017 was the highlight of his three-year tenure in charge.

As well as managing his home club and county, he has had management spells with Ballymartin, Darragh Cross and Tullylish in recent years.

Down GAA has led the tributes in a statement: “Today the world of Down GAA has been rocked by the sad news that one of our most favourite sons Eamonn Burns has passed away suddenly.

“Eamonn was a double All Ireland Medal winner and a former County Senior Team Manager. To his wife Sinead, Sons Cathal and Thomas, brothers Malachy and Colum and sister Mary we extend our deepest and heartfelt sympathy.

“Eamonn Burns was the youngest of three brothers who all would wear the green and gold of Bryansford and the Red and Black of Down.

“Having graduated through the ranks Eamonn made his Senior County debut in 1987/88 and will be best remembered as midfielder on the All-Ireland winning team of 1991. Down fans will remember Eamonn’s two points from play in that win over Meath as Sam Maguire returned North for the first time in 23 years.

“In 1994, Eamonn was once again to the fore this time at right half back on the team that defeated Dublin playing through the pain barrier to ensure that his beloved Down made it five All Ireland titles.

“Indeed, it is only a few short weeks ago that Eamonn and the boys of 1994 once again adorned the sward of Croke Park as they were introduced to the crowd as the Jubilee team of 25 years ago on All Ireland Final day.

“After his distinguished playing career with both Club and County, Eamonn took on coaching and managerial roles guiding Bryansford to a Down Senior Championship success.

“For Eamonn it was a case of serving his County when he was needed and at a time when Down football was not enjoying the best of fortune, Eamonn Burns remained a dignified figure at all times who only ever gave of his very best in the cause of Down.

“In 2017 there were memorable days as relegation was avoided in Cork and the Ulster Championship saw us record victories over Armagh in Newry and on a particularly special night in the Athletic Grounds a win over Monaghan and against all the odds Eamonn Burns had guided Down back to an Ulster Final. Success was to elude us against Tyrone but pride had been restored in our County in no small way due to the efforts of Eamonn Burns, a man who himself had great pride in the Red and Black.

“After the Championship of 2018, Eamonn resigned as County Senior Team Manager and he did so in a manner fitting of the man, quietly, with dignity, decency and with only the best interests of Down in mind.

“Eamonn was a great ambassador for Down as a player and as a manager. He was one of the good guys, always about the greater good, always selfless with his time and only wanting to give of his best in any task that he undertook.

“Down GAA have been privileged to have Eamonn Burns amongst our sons, he gave us as supporters many magical moments, he brought a smile to our faces and in those days of 1991 and 1994 he helped bring us glory days.

“Eamonn has been taken from us too soon, we will miss you Eamonn but we will smile in the memory of the days that you gave us. You were a true son of Down.

“On behalf of the family that is Down GAA we offer our deepest and heartfelt sympathy to Sinead, Cathal, Thomas and to Malachy, Colum, Mary and the Burns and Mullan family circle.

"Eamonn, a vital member of the Down All Ireland winning teams of 1991 and 1994, recently graced Croke Park again with his team mates from the Mourne County as they celebrated the silver jubilee of the 1994 triumph. For Down fans the midfielder’s points in the 1991 All Ireland final against Meath will live long in the memory.

"More recently Eamonn was the manager of his native county from 2016 to 2018 guiding them to the Ulster final of 2017.

"To Eamon’s wife Sinead, their children, his siblings, wider family circle and his many friends, heartfelt sympathies are extended on behalf of Ulster GAA.

It is with great sadness that we have today learned of the passing of our member Eamonn Burns. An All-Ireland winner with Down, he was a true legend of both club and county. From all at the club we extend our sincere condolences to his family at this sad time. pic.twitter.com/U1sAYpH6OV