Kerry cruised to their 21st National Football League title with a impressive display against an understrength Donegal side at Austin Stack Park this afternoon.

First-half goals from Sean O’Shea and Gavin White saw Peter Keane’s side take control of this contest and never look back, as they went on to lead by seven points at the break.

The deadly duo of David Clifford and Tony Brosnan kept the scores coming in the second-half for the Kingdom, while Donegal - without the services of Michael Murphy, Ryan McHugh, Neil McGee and Eoghan Ban Gallagher - hit a drought that only saw them register 0-2 after the interval.

That saw Kerry ease to a 14-point triumph here as they claimed their first Division 1 success since defeating Dublin at Croke Park in 2017.

David Moran handed the hosts the lead inside the first minute of this seventh-round encounter prior to Donegal hitting back with a brace of points from Ciaran Thompson.

Dara Moynihan took a nice feed from Clifford to level matters come the eighth minute but the Ulster champions would have their noses out in front again by the water break.

This time it was Oisin Gallen’s well-stroked free on 14 minutes after Jason Foley had committed the foul which warranted him a black card.

Keane’s charges responded in the best possible fashion after the short break, as a perfect pass from Tom O’Sullivan found O’Shea’s run and the deadly accurate Kenmare man made no mistake with the low finish.

O’Sullivan broke forward again to lash over and make it 1-3 to 0-3 on 19 minutes and a minute later the ball would be in Donegal’s net again.

Wing-back White smashed in a rocket shot to leave the visitors six behind with a quarter of an hour remaining in the half. 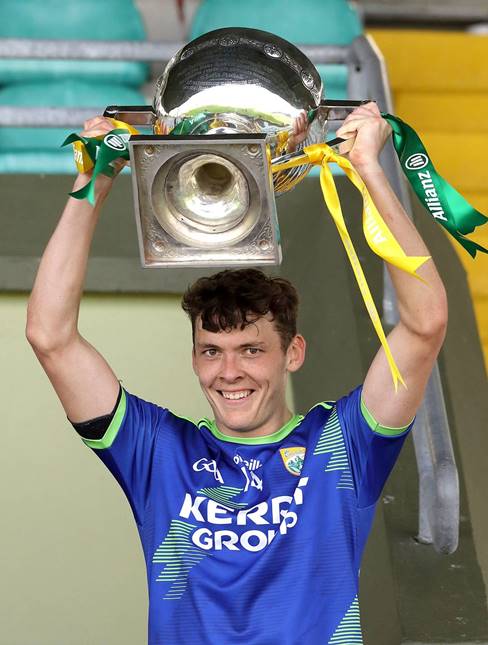 Jason McGee posted the Donegal response via a fine point but a quick hat-trick of scores from Brosnan at the other end looked to have their ship sinking fast.

Thompson (2 frees) and McGee helped to steady things for Declan Bonner’s men though prior to them losing Paddy McGrath to a black card.

O’Shea and Brosnan kept the scores ticking over for the Munster champions ahead of a Caolan McGonigle point being erased by Clifford (free), leaving it at 2-9 to 0-8 at the half.

Gallen made it a six-point game three minutes into the resumption as Kerry introduced Jack Barry and Stephen O’Brien to the fray after an O’Shea free.

Clifford shot over a brace of points to outweigh another from Thompson, moving the Munster champions eight ahead come the 50th minute.

Brosnan added to the home side’s tally just before the water break and the game would be well and truly up for Donegal after a converted mark from the Dr Crokes star was backed up by another point Clifford, who had been going for goal.

It left the Tir Chonaill men trailing by 2-15 to 0-10 with less than quarter of an hour remaining in Tralee, where the hosts had one hand on another league crown.

O’Shea (2, 1 free) and Clifford raised the winning tally to 2-18 as the Kingdom cruised to their second Division 1 title in four years.