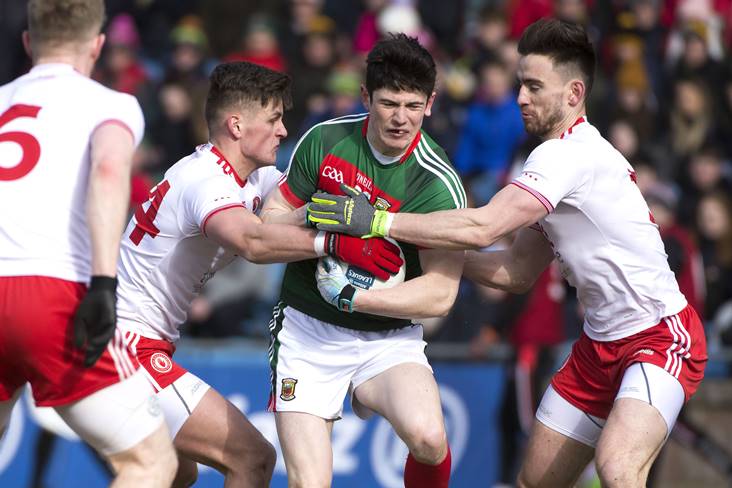 Tyrone's resounding 2-14 to 0-8 victory over Mayo in Castlebar means the Ulster champions have preserved their top-flight status.

While the winners recorded their third win of the campaign, it was a nightmare afternoon for Stephen Rochford's men, who lost Lee Keegan to a nasty-looking injury and now face a winner-takes-all relegation shoot-out against Donegal in Ballybofey in seven days' time.

Mickey Harte's slick charges led by eight points to three at the end of a first half that produced more drama and talking points than an entire season of Premier League soccer (including two red cards). Goals from Lee Brennan and Conall McCann at either end of the second half subsequently put the westerners firmly to the sword.

It was a very bad-tempered first half as both sides were reduced to 14 men before the short whistle. Colm Boyle was first to go, for a second yellow card offence, the first of which was a late tackle that took Hugh Pat McGeary out of the game. Padraig McNulty then picked up a straight red card and the various delays meant that ten minutes of injury time were added on before the turnaround.

Mayo also lost Keegan (shoulder) to injury and Andy Moran to a black card but a brace of Conor Loftus frees deep into added time represented their second and third points of the opening period.

After Cathal McShane missed a goal chance, Loftus clipped over his third successive point but a 39th-minute Brennan strike to the roof of the net finished the match as anything remotely resembling a contest - 1-8 to 0-4. Declan McClure, McAliskey (two frees), Conor Meyler and the excellent Donnelly increased the winners' tally and substitute Fergal Boland's reply on the hour barely raised a cheer.

Brennan swapped scores with Neil Douglas and Loftus (free) pulled back another consolation. It was left to Tyrone substitute McCann to blast in the winners' second goal in the last minute of normal time. Having blasted a penalty wide, Loftus closed the scoring from a late Mayo free.