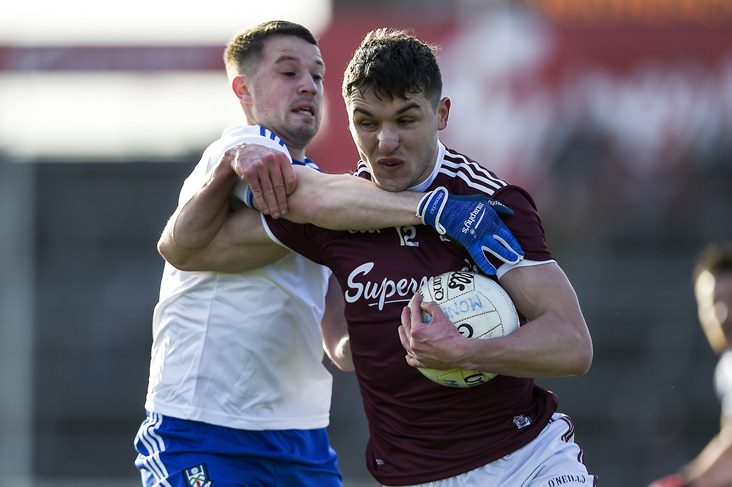 Galway's Michael Daly looks to get past Ryan Wylie of Monaghan

There was high drama at sunny Salthill, where Galway took the points with a 1-14 to 0-16 victory over Monaghan.

A draw looked to be on the cards in a nerve-shredding finale to an exciting contest, but Robert Finnerty’s first-half goal proved to be the decisive score as Seamus McEnaney’s first league game back in charge of his native county ended in agonising defeat.

Finnerty’s three-pointer had the home team ahead by 1-8 to 0-8 at the end of an entertaining, breath-taking first half, Galway goalkeeper Conor Gleeson also making a vital contribution as he saved a Conor McManus penalty.

The Tribe started best and Finian O Laoi’s score had them two clear by the seventh minute but a McManus brace followed by a tidy score from Kieran Duffy ensured the border county of a 0-3 to 0-2 advantage after ten minutes.

Shane Walsh’s free levelled matters for the second time and Cein D’Arcy restored the westerners’ lead only for Ryan McAnespie to quickly equalise. At the midway stage in the first half, Monaghan were badly caught out when an overlap presented impressive debutant Finnerty with a goalscoring opportunity and the Salthill-Knocknacarra clubman tucked his shot away beautifully.

Kieran Hughes pulled back a point and home goalkeeper Gleeson made his first great save to repel Jack McCarron’s snapshot before Walsh replied nonchalantly to a Conor McCarthy strike – 1-5 to 0-6 after 20 minutes. Walsh’s free stretched the gap and four points separated the teams when Adrian Varley pointed an advanced mark.

McCarron’s free brought the visitors back within three with ten minutes left in the first half and the Farney County had a lucky escape when McAnespie almost handpassed the ball past Rory Beggan to the Monaghan net. A foul on Dessie Ward presented McManus with the penalty, which was brilliantly saved by debutant goalkeeper Gleeson, a former Galway United shotstopper, before Beggan thumped over a trademark free two minutes from the break.

Wing back Gary O’Donnell closed the first-half scoring with a classy strike off the outside of the boot as Padraig Joyce’s men carried a three-point advantage into the interval.

The flying Finnerty flashed a goal chance inches over the bar within seconds of the restart, with McManus replying after good work from Karl O’Connell, but the Ulster county suffered a blow when Conor McCarthy was black-carded, Walsh’s curling free and a sublime Paul Conroy strike nudging the Tribesmen into a five-point lead, 1-11 to 0-9.

Back came Monaghan… Kieran Hughes and McManus (advanced mark) pulled back a couple of excellent points and temperatures soared as players and officials from both teams squared up to one another, a real edge coming into proceedings. Monaghan had the bit firmly between their teeth and they drew level with further points from substitutes Christopher McGuinness and Aaron Mulligan either side of a McCarron effort.

The run of five Monaghan points was ended by a Walsh free in the 63rd minute as Galway moved back in front, McManus replying with his fifth point from a free after O’Connell was stopped in his tracks. Substitute Damien Comer was content to fist his point as he bore down on goal with five minutes to go and there was a telling four-point swing when substitute Matthias Barrett added to the winners’ tally after full back Sean Mulkerrin had made a dramatic goal-line save to deny McGuinness what might have been a match-winning goal.

McManus (free) halved the deficit as the game moved into five minutes of injury time, Ryan Wylie having been unceremoniously dumped as he raided forward. In a nerve-wrecking finale, play was held up more than once due to injuries to Galway men, eating into the added time, and there were no more scores as the hosts held on for a hard-earned win.