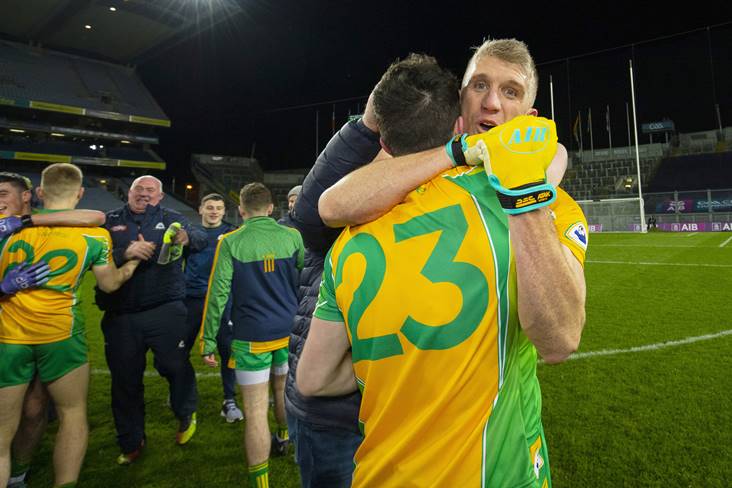 In fairness the Corofin sub wasn’t leaving Lundy in the tunnel on his own. Like he was coming over the top rope! #GAA pic.twitter.com/djFXuQL5eo

Legend of the game https://t.co/WFGtqyTjVr

Congratulations to Corofin on a magnificent 3 in a row. A superb team.
Hard luck to our warriors, you battled gamely and it just wasn’t to be in extra time. We are so proud of you all. #UTM

Enjoyed that final, two ballsy teams. Corofin show there is no room for nice guys at the top table in Gaelic football.

Delighted for @CorofinGAA! Football won out in the end after a tense battle with Kilcoo. The best team, the club scene has ever seen & special mentions to @gsice & @corofinabu1 phenomenal athletes & loyal servants to the club enjoy the celebrations #GAA #GallimhAbú

Hats off to Kilcoo. Battled well. Could have/should have maybe won it in normal time. Corofin, 3 in a row, phenomenal achievement👏🏻

Rampant bias permeates through GAA offialdom. Not necessarily wanting to favour one team over other they just can’t help themselves by need to be part of occasion. Good refs would have given free from original position - sadly not many of them in our sport. #GAA #thetoughest.

How could you not admire & respect @KilcooGAC worst display of refereeing seen for some time for both teams but they deserved not lose that game. Serious performance/character down to 14 men with 20 remaining & kept going to the end. Interesting 30 minutes ahead. #TheToughest

Thanks very much!
It was a very tough, competive game and it took us the whole hour to overcome ye, including a very nervous last few minutes.
All the best to ye and enjoy your homecoming anyway. Ye outnumbered us in the stands today by 4 to 1.
Beidh lá eile agaibh arís!

Savage day at the office - A serious 24 months for this panel of players. Congrats to Conahy Shamrocks and Tullaroan on their All Ireland success. A clean sweep. #3 @KilkennyCLG #tank @BallyhaleGAA ☘️☘️☘️☘️ Also best of luck to @taggykk tonight 🕺🕺🕺 pic.twitter.com/iAjbGz2F5V

With @BallyhaleGAA winning today they make it a clean sweep of Hurling club titles for Kilkenny clubs this year, all won by 3 places low in population.
This proves:
It’s NOT a numbers game....it’s all about creating a culture & a passion for the game...that the Club is everything

What an athlete, genuinely don’t know anybody who could do what this man does! 💪🏻 https://t.co/ej2SrvyKDu

Two great games in Croker today. Still not a fan of the All-Ireland Final being played on the 19th of January but I enjoyed watching four great clubs going at it.
Well done @BallyhaleGAA and @CorofinGAA #TheToughest

Shane Walsh with the longest and greatest speech ever 👏

Great to see some of the lads in the @MansionHouseDub last night representing the Dublin Senior Footballers, as Jim Gavin was honoured with the Freedom of Dublin City 💙 pic.twitter.com/EKYKE1PQdb

Shocking decision from @RTEgaa a true professional of broadcasting & reporting, one of the best comentators in the business, and the voice of Gaa for decades. @briancarthyrte https://t.co/W2W1sxoysv

That would be an interesting Sunday game panel 🙄 pic.twitter.com/Wxq7RSWIdv