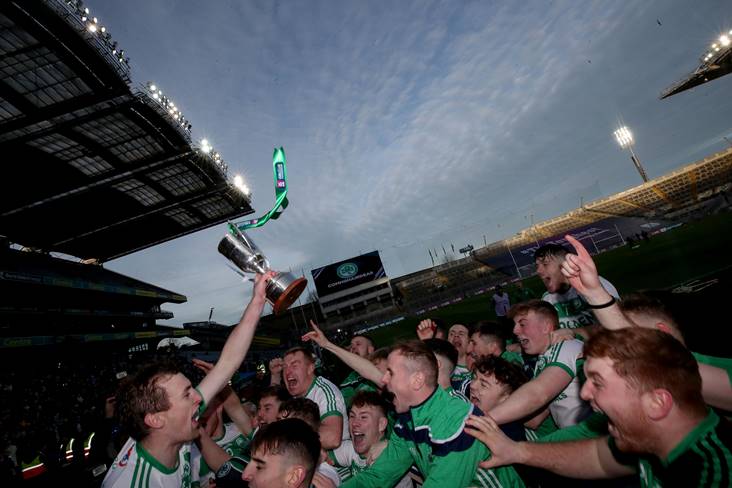 “As joyous as an occasion as it is today it’s a very sad day as well. There’s no doubt about it, to do back to back you have to have serious desire and want. I think Eugene Aylward’s passing last year has given them that want and desire. They wanted to do something special and have that jersey with them.”

“Sure, we’re disappointed obviously, after losing an All-Ireland final there are no easy words. But you have to actually give credit to Ballyhale. They’re an exceptional club first of all and the fact that they’ve just achieved their eighth All-Ireland final (win), I mean the mind boggles when you think of that they’ve achieved.”

“In the other finals we went out, we were let play football. That was the way the other teams set up. Today was probably a bit more defensively. It was hard to get scores out there. Kilcoo are very well drilled and set up, they try to hit you on the break. . We knew going in that once we set up after full time that our panel would be strong.”

Kilcoo asked serious questions of Corofin and Kevin O’Brien’s team came up with the answers to collect a historic Andy Merrigan Cup three-in-a-row.

“You have to dust yourselves off and accept that Corofin are probably the greatest, definitely the greatest club team of all time, and we went toe-to-toe with them for long periods and we came up short.”

Selectors Conleith Gilligan and the Kilcoo management couldn’t have asked for more from their players.

“It’s just a magical time. I said it to the lads inside, it’s like being in Disney World for the last three months.”

“Looking at the age profile of the team, it is hugely important that we retain our place in Division 2 and I hope we can do that.”

Padraic Davis hopes Longford’s O’Byrne Cup final win over Offaly will boost their confidence ahead of the league action.

“We were going very, very well but this brought us back down with a bang and we have got to address that and move forward and get back on the pitch as soon as we can.”

Offaly will look to learn from their mistakes says John Maughan.

“The reason we gave him captaincy is he has shown great leadership since we came in. He is 26, he is pushing on and it’s time for him to show the country what he can do. Hopefully he can continue to do that during the league.”

Captain Shane Walsh was singled out for praise by manager Padraic Joyce after his 1-8 haul in Galway’s Connacht SFL  final win over Roscommon.

“Division 2 is going to be really, really tough. Laois are a fine time and we need to get to the level that we got to against Galway, and beyond for a full 70 minutes.”

Roscommon boss Anthony Cunningham is focused on next weekend’s opener against Laois.

“I still have not given up hope, I hope he does come back and be with us this year, but if he is to go and play the professional game, I wish him all the best.”

Despite getting their hands on the Walsh Cup with a one-point win over Galway, Davy Fitzgerald will demand improvement from his Wexford troops ahead of their opening round league assignment against the O’Moore County.