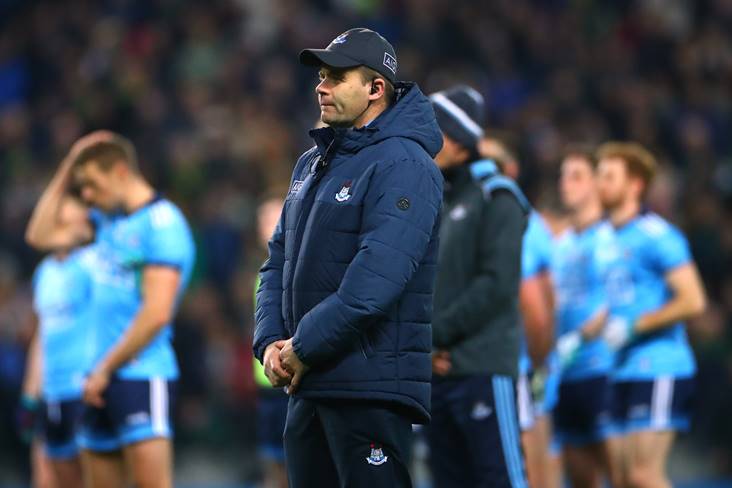 Twitter is flooded with reactions to Dublin senior football manager Dessie Farrell being banned after pictures emerged of a recent training session involving nine Dublin footballers and a coach at Innisfails GAA club...

Farrell was suspended for 12 weeks by the Dublin management committee as a result of an internal investigation into the breach of Covid-19 regulations.

In response to the revelations, Dublin GAA stated: "The Dublin senior football management and players recognise that this was a serious error of judgement and apologise unreservedly for their actions."

The GAA said they will "pursue" the allegations and "invoke any necessary disciplinary processes as appropriate."

Take a look at some of the reactions here:

Have a premium subscription @Independent_ie and this is front page news - I’m not saying that it was right what went on (by no means) but front page? All that’s going on at the min and this is your headline story? #ForShame #subcriptionCancelled

If the GAA also hand a ban down to Dessie Farrell then it cannot be concurrent. It's absoloutly pointless to ban him for the same time his own county have. Its the GAA, not Dublin, who should be hamding out the punishments #DublinGAA

Dublin GAA should have to rescind their last two All Ireland football titles and give one each to Laois and Westmeath to not have us with the weight of history on our shoulders across the Midlands.

Dessie Farrell isn’t going to be gone for all the meaningless games.
He’ll be back for Leinster 1/4 final.

Balgriffin Graveyard runs up the flank of Innisfails GAA ground where the Dubs were training...

...this story will hardly be the graveyard of Dubs' seven-in-a-row ambitions.

I genuinely think those Dublin players have done nothing wrong. 9 lads kicking around, which is proven to be safe.
Non contact - non story #GAA

Not considered an elite sport, less lads in that field 100m sq pitch than there is in any park / basketball court / dunnes stores etc / a lot of houses - in this weather , absolute rubbish. Dead right to go kicking a ball together , a lot worse things out there #GAA #DublinGAA

Instead of people giving out about the wider #GAA,start speaking out about the House Parties around the Country, big numbers of people gathering on the Dodder & widespread drinking in public parks etc the last few weeks. #Covid19Ireland #LockdownIreland

Has to be April Fools, sure they haven’t a competitive game coming up for 9/10 years https://t.co/1CruEf3t2b

How the hell did the Dublin GAA players not think they'd be recognised?

Anyone that goes out to take photos of other people for the purpose of posting them online to slate them for breaking restrictions, needs to take a long, hard look at themselves & their miserable lives. #LockdownIreland

Dessie Farrell @DubGAAOfficial manager has been suspended for 12 weeks after an investigation into a breach of Covid-19 guidelines by some Dublin players. The County Board say: 'Management and players recognise that this was a serious error of judgement and apologise unreservedly

I hope the Dublin players swept the dressing rooms.