Jerome Johnston helped himself to 2-2 at Kingspan Breffni as Kilcoo cruised to a 11-point victory against Ramor United in tonight's Ulster club SFC quarter-final.

Last year's beaten All-Ireland finalists ran out comfortable 3-13 to 1-8 winners to advance to a meeting with Glen or Scotstown who face off at Celtic Park tomorrow afternoon.

Ramor were right in contention at the break when Sean McEvoy's opening point, ending a barren 25-minute spell for the Cavan champions, left them trailing 1-6 to 1-2. They rattled off three points in a row on the restart to narrow the gap to one but that was good as it got for Ray Cole's side. 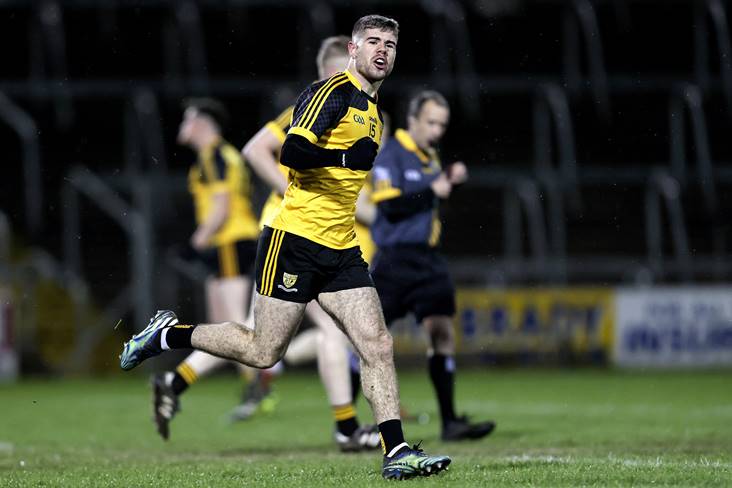 With Johnston and his brothers Ryan and Shealan firing on all cylinders, Kilcoo outscored their opponents by 2-6 to 0-0 between the 36th and 60th minutes - Ceilum Doherty's goal put the Magpies into a double scores lead by the second water-break (2-10 to 1-5). They were already home and hosed when Johnston grabbed his second major before McEvoy broke another scoring drought for Ramor near the end.

After early points from Kilcoo duo Anthony Morgan and Johnston sandwiched a James Brady mark, 19-year-old former Republic of Ireland international soccer player McEvoy half volleyed to the net to give Ramor the lead for the first and only time, 1-1 to 0-2. However, Kilcoo's response was instant as they reeled off 1-5 to effectively take control of the contest.

A notable aspect of this impressive win for the Down kingpins was that 3-9 of their match tally came from play.

Watch all the goals here:

Sean McEvoy is handy on the soccer pitch and he used those skills to great use with this fine individual goal for Ramor United against Kilcoo.

Live now on RTÉ2 and the RTÉ Player - https://t.co/j90jEuigvs pic.twitter.com/z0GC9NGdQO

A trademark Jerome Johnston goal has helped Kilcoo into a 1-06 to 1-02 interval lead over Ramor United in the Ulster Club Championship.

Live now on RTÉ2 and the RTÉ Player - https://t.co/j90jEuzRU2 pic.twitter.com/cjLWOeQUQs

It looks a long way back for Cavan champions Ramor United as Ceilum Doherty’s goal has helped Kilcoo into a 2-11 to 1-05 lead at the second-half water break.

Live now on RTÉ2 and the RTÉ Player - https://t.co/j90jEuzRU2 pic.twitter.com/AyHsZVFvAl

Jerome Johnston’s second goal capped off a fine night for Down champions Kilcoo as they started their Ulster Club campaign with a 3-13 to 1-08 win over Ramor United. pic.twitter.com/T47MlycHbW

Joyce confirms Mulkerrin's season is over