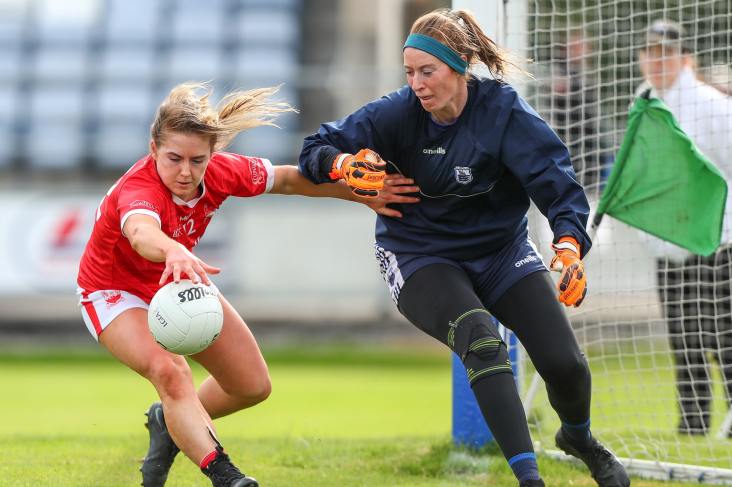 Shane Ronayne’s side had to come from four points down against their Munster rivals before securing their place in the quarter-finals as Group D winners following a double-scores result.

Waterford have now been plunged into the relegation series and a one-off battle for survival against Monaghan, but they will take huge heart from their first 20 minutes against the Rebels this evening.

Aided by a strong breeze in the first half, Pat Sullivan’s charges conceded the first point to a free but immediately struck two gorgeous scores from the boot of Katie Murray to hit the front.

The Déise women were enjoying plenty of possession in the early exchanges and starved the talented Cork attackers of the ball, up until a poorly-placed short kickout was seized by Áine O’Sullivan, 30 metres out from the Waterford goal.

Two quick passes later, the ball was in the hands of Doireann O’Sullivan, who duly picked out the bottom corner of the net with a very composed finish.

Waterford’s response was exemplary, as they retook the initiative through a Lauren McGregor goal, tapped in from close range after Annie Fitzgerald timed her pass perfectly.

When Katie McGrath sent a soaring kick over the bar from 35 metres, Waterford were 1-5 to 1-1 in front, and had a real chance of delivering an upset.

Arguably the next ten minutes was the winning of the game for Cork as they took control of possession, and halved the deficit by half-time. Ciara O’Sullivan’s deft work led to a glorious point, and realistically, a two-point interval lead was never likely to be enough for Waterford.

Defensively, Waterford held out well, aided by a couple of excellent saves from Katie O’Hanlon and good play from captain Karen McGrath, but in Doireann O’Sullivan, Cork had a free-scoring attacker that simply wouldn’t be denied.

From frees and from play, the Mourneabbey star clipped over points with ruthless accuracy to give Cork the lead, before turning provider for the clinching goal after 53 minutes. Her delivery into the Waterford square was brilliantly fielded by Libby Coppinger, who held off the challenge of O’Hanlon to get her shot away and rattle the net, giving Cork enough breathing room to comfortably see out their win.