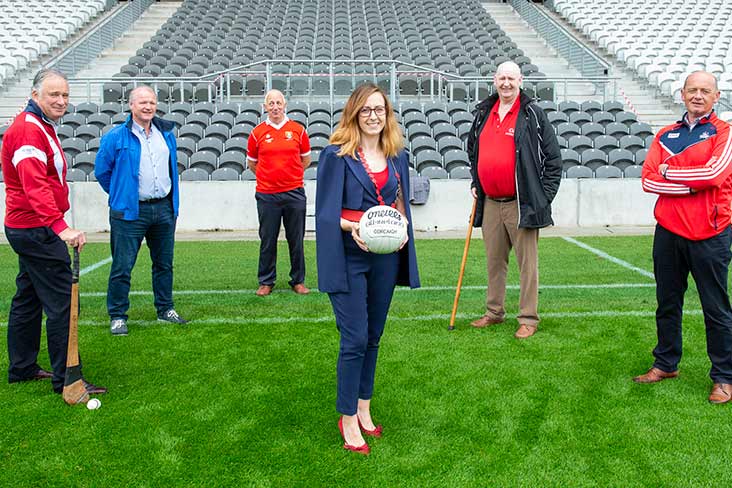 Cork GAA and Marymount Hospice are calling on Cork to GO RED on the 16th September to mark the 30th anniversary of Cork winning the GAA double in 1990. As well as drive awareness of an outstanding athletic achievement for the county, the initiative, a brainchild of current Cork GAA hurler Conor Cahalane whose father Niall was on the winning 1990 football team, aims to raise much needed charitable funds for Marymount Hospice.

To get involved the people of Cork are asked to Go Red on the 16th September – either through wearing your jersey, red clothing or accessories or red up your remote office, home or car – and then donate to the campaign through the online campaign link – www.idonate.ie/goredforCork.

Speaking at the launch which coincides with the Hurling anniversary win on 2nd September, Conor Cahalane said he was motivated to both mark the significant anniversary and also support Marymount Hospice. “We had supported Marymount earlier in the year through the hugely successful Cork Hurlers Solo run campaign so I knew that Marymount were really suffering due to Covid-19 cancellations so I wanted to do something more to help. I wanted to also help promote the significant achievement of the Cork GAA players of 1990 including my own father. Winning the double is something very special that doesn’t happen very often and we need to celebrate it as a county.”

Kevin O’Donovan, Cork County Board CEO, said he was delighted to give a socially distanced welcome to the 1990 players from both teams to Pairc Ui Caoimh to help launch the campaign.

“Cork GAA is delighted to get behind this great campaign. 1990 was an iconic year for Cork GAA and still stands as an unmatched high-water mark in Gaelic Games nationally.  We would like to call on all Rebels to Go Red for Cork on September 16th to mark the 30th anniversary and donate online at:  www.idonate.ie/goredforCork. We think it will bring some much-needed joy and a bit of nostalgia as we look forward to the return of our county teams over the coming weeks.”

Some 75% of the proceeds of the campaign will go to Marymount Hospice, with 25% going to Cork GAA. Due to Covid-19 Marymount has had to cancel all of its busy schedule of fundraising events for 2020, which marks its 150th year.

To get involved in the campaign and help turn Cork red on the 16th September:

Wear red on the day of the 16th September - this can be your jersey, your red accessories or decorating your virtual office. We want to Turn Cork Red!

And DONATE - you can donate through www.idonate.ie/goredforcork and encourage your friends and family to do the same. 75% of all donations go to Marymount Hospice which has been seriously impacted through covid-19 and 25% goes to Cork GAA.

Get your school, community group or office and workplace involved - use your team zoom meeting as an opportunity to share out the 'Go Red' message