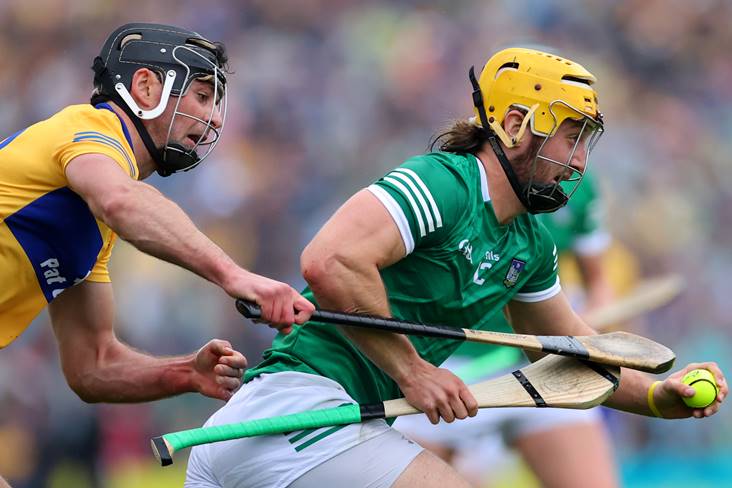 Limerick captured a fourth successive Munster senior hurling championship crown this afternoon when beating Clare by 1-29 to 0-29 in an unforgettable final after extra-time at Semple Stadium.

Despite the poor conditions, the Shannonside neighbours served up a titantic battle that ebbed and flowed over 90 plus minutes before the reigning All-Ireland champions finally landed the insurance point when Will O'Donoghue sent over the bar to seal a memorable victory.

John Kiely's side looked as if they had done enough to get their hands on the new cup named in honour of their legendary player Mick Mackey in normal time after Declan Hannon's monstrous point put them one ahead with injury-time ticking away but Clare marksman Tony Kelly showed nerves of steel to force extra-time from a stunning sideline cut, 1-21 to 0-24.

Kelly ended the contest with 0-13 (six from play), while for the winners, Seamus Flanagan gave a man-of-the-match display that yielded an impressive seven points from play and a sideline cut.

With an All-Ireland quarter-final against Kerry or Wexford next up on June 18, Brian Lohan's Clare can take plenty of positives from another impressive performance - they made all the early running to lead by 0-3 to 0-0 and went three clear again in the 24th minute, but a Gearoid Hegarty goal helped Kiely's charges go in level at the break - 1-11 to 0-14.

Both sides went at it hell for leather throughout and were level on no fewer than 15 occasions in normal-time with Kelly's eleventh point worth the admission fee alone for the sell-out Thurles crowd.

But Limerick showed they are still hungry as ever for success and had plenty left in reserve to outscore their opponents by 0-8 to 0-5 thereafter as they turn their focus on retaining the Liam MacCarthy Cup.