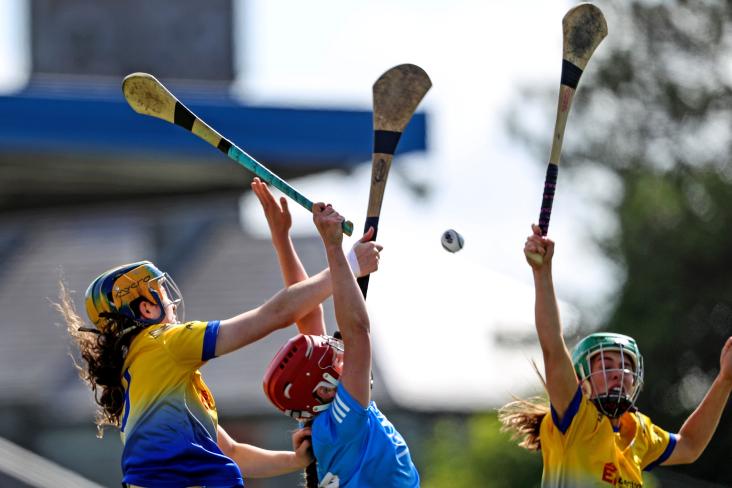 Cork guaranteed automatic progress to the semi-final of the Glen Dimplex All-Ireland Senior Camogie Championship by virtue of their hard-fought victory over Waterford at Walsh Park but it remains all to play for in Group 1 as four of the other five teams battle it out for the two quarter-final berths.

Waterford remain in second on six points and with a healthy score differential while Tipperary, who struck late to deny Wexford are level on five points with Dublin, who let a five-point lead slip late on against Clare to leave Ennis with just a share of the spoils. With the teams having drawn in their previous clash, it is the fact that the Premiers have scored three more points that puts them ahead.

Despite their reverse, Wexford remain in contention too, while Clare will consider what might have been as they cannot now make it to the last six after two draws and two narrow defeats.

The Clare-Dublin tie at Cusack Park ended in a welter of excitement as the home team stormed back from a five-point deficit after Leah Butler’s 56th minute score to snatch a 1-9 to 1-9 draw.

Clare Hehir plundered a goal from the very next attack  and Eimear Kelly reduced the margin to the minimum right on the hour. Exchanges were fraught thereafter but it was Clare who found the key score, Lorna McNamara slotting a free in the fifth minute of injury time to bring the sides level.

A brace of McNamara points gave Clare an early advantage but a goal and two points from Aisling O’Neill put the Dubs 1-4 to 0-4 ahead at half-time. It was nip and tuck after the resumption but when Butler arced one over after Issy Davies had done likewise, it looked like Adrian O’Sullivan’s charges had done enough but they had to settle for one point rather than three.

Cork were given a real test by Waterford before chiselling pit a 0-12 to 0-8 triumph at Walsh Park. The Déise girls were a constant nuisance that their neighbours could never shake off and it was a sense of relief to Rebel followers when the final whistle sounded.

Waterford made their intentions clear with points from Niamh Rockett and the magnificent Beth Carton in the second minute but Cork settled and with Méadbh Murphy, Katrina Mackey (two), Fiona Keating and Cliona Healy dispatching shots between the posts, it looked like Cork would pull away.

That wasn’t to be however, as Carton landed two more points, though Waterford were fortunate when Chloe Sigerson missed an injury-time penalty and it was 0-6 to 0-4 at the change of ends.

The outstanding Mackey and Laura Hayes doubled the margin and though Sarah Lacey and Carton kept the Suirsiders in contention, it was Matthew Twomey’s crew that just had a little more gas in the legs in the closing stages, Amy O’Connor, Healy and Hayes raising white flags late on and captain, Amy Lee saving Carton’s 70th minute penalty.

Grace O’Brien floated over a delightful point in injury time to snatch a 0-15 to 1-11 victory for Tipperary over Wexford at Bellefield and keep their aspirations of advancing to the last six alive.

Wexford started well and led thanks to a kicked goal by Joanne Dillon, who had gathered from Leah Walsh’s delivery. Devane got Tipp back into the game with five points to push them in front for the first time at the end of the first quarter.

Anais Curran was accurate from placed balls for Wexford and with Sarah O’Connor and Dillon adding points, they looked like heading in at the break in front but Tipp finished strongly and it was 1-6 to 0-9 at the break.

Fryday put Tipp ahead in the second half with her second point but it was the home team that made all the early running, their star operators Dillon and Ciara O’Connor contributing along with Curran and Sarah O’Connor as they shot five points in succession.

This prompted a change of tactics by Bill Mullaney and co, with the spare defender dropped in favour of pushing up player on player, and Devane brought out from full-forward in a bid to get her more involved. It proved a masterstroke.

With the omnipresent joint captain O’Brien in inspirational form, Tipp chipped away with five scores on the trot. O’Brien hit the first, then came a Devane trio including two from play before O’Brien bagged the dramatic winner.

That means it’s all to play on July 2, with Tipperary travelling to Páirc Uí Rinn to take on Cork, Waterford going to Clare and Wexford playing host to Dublin. Remarkably, Waterford, Tipperary and Dublin could lose and qualify, but they could draw and not do so.

Therefore, like Wexford, who have no other option but to win, they will be playing for all the marbles. It promises to be an enthralling conclusion to a competitive Group 1.