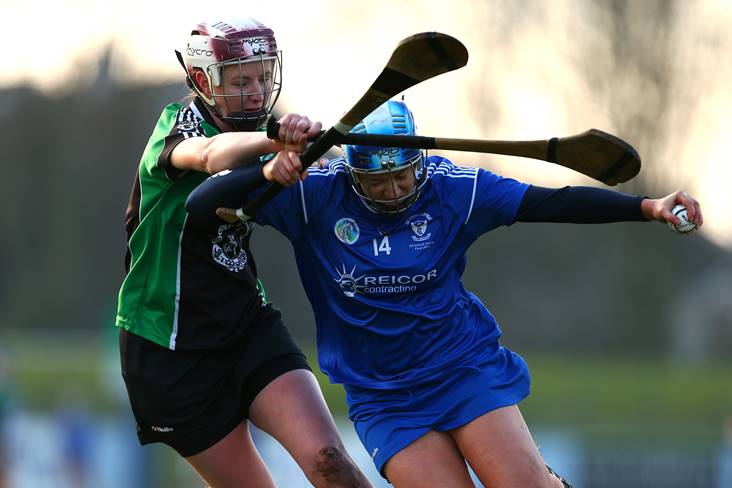 A stunning second half performance from Clanmaurice, crowned by 1-2 from last week’s hero Jessica Fitzell, secured the holy grail of the All Ireland Junior Camogie championship title for the North Kerry side this afternoon in Nenagh.

Last Sunday at the same venue it was a magnificent solo score from Fitzell that gave Clanmaurice a second bite at the cherry and they seized their chance by firing 2-4 without reply when the game was in the melting pot, with Fitzell and Rachel McCarthy the goalscorers, adding to the first half major from Saidhbhe Horgan.

Raharney would have been the happier side in the early stages as they settled into the game far quicker than a week ago, when they were dominated by Clanmaurice in the opening half an hour.

At midfield they were far more competitive, giving their forwards a lot to work with. They ran into a brick wall in the shape of Clanmaurice captain Liz Houlihan at the edge of the square, who repelled wave after wave of attack, but three frees from Pamela Greville, to of them earned by strong running from Aoife Doherty, put them 0-3 to 0-1 in front after 20 minutes.

The heavy ground made it hard for either time to keep possession of the ball and to work the ball through the lines, so Saidhbhe Hogan’s score after 22 minutes proved to be the game’s first score from play. Hogan, along with Clodagh Walsh, was introduced to the team after coming off the bench last week and they combined for a crucial goal three minutes later.

Clodagh Walsh’s shot for a point crashed back into play off the upright, and Hogan pounced to sweep it into goals. A point from Greville, another free, made it 1-2 to 0-4 at the interval, and they retained momentum after half time, drawing level through Andreanna Doyle in the 6th minute after half time.

Their crucial score came from Fitzell, who won the ball over the top of the full back line, passed the ball to forward Clodagh Walsh, and once the sliothar broke loose it fell perfectly for Fitzell to whip it into the goals, leaving Clanmaurice four points ahead. Laura Collins scored another superb point, Rachel McCarthy drove forward and after covering 50 metres of ground, fired in a decisive third goal in the 23rd minute, dropping her strike over Anna Weir’s head to push the lead out to nine points.

Even with all the heartbreak that the club had endured in recent years, they were never going to let it slip from there.