"It was great to have the camogie. It was something that we could cling on to" 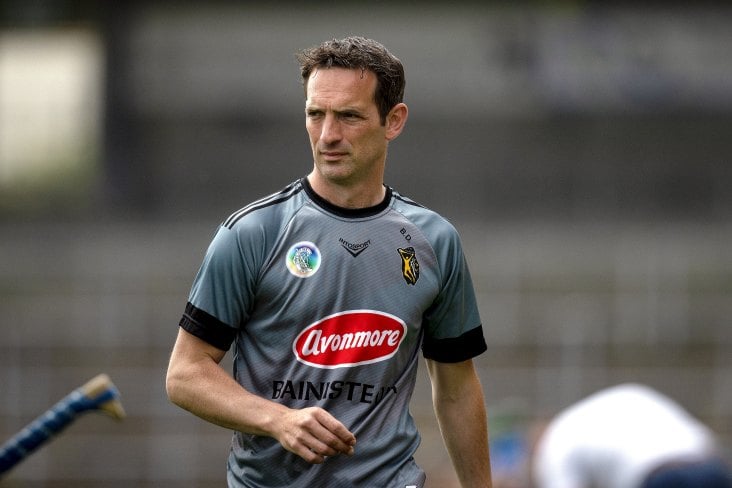 While all the focus has been on one Kilkenny manager this week, another is preparing for a mammoth challenge.

Brian Dowling hurled for the Cats under Brian Cody, winning two All-Irelands at senor level (as well as his pair of U21s) and a League medallion. And he literally did win the latter in 2002, on the day all Cork’s starting 15 bar one and none of Kilkenny’s bar one made their ‘shirts out, socks down’ protest during the parade.

An hour and a half later, the 19-year-old Dowling scored the last two points, including the match winner, despite only entering the fray as a 64th minute sub, not long after older brother Seán had been introduced and also split the posts.

He would score a fabulous point in the closing minutes of the subsequent Leinster final against Wexford too but a broken ankle slowed his progress and he fell out of favour.

The O’Loughlin Gaels clubman might have a notion of what it will be like for whoever succeeds Cody, whenever succession takes place, having stepped into the vacancy left by another legend, Ann Downey as Kilkenny camogie manager in 2020.

That he had served as a selector and coach the previous year helped, and Downey herself made the initial approach, days after defeat in the 2019 All-Ireland final. There may be another link there, if Derek Lyng or some other former Cody acolyte ascends to the hurling throne – be that this week or in ten years’ time.

Dowling, of course, had a steeper learning curve in that he had never actually been involved with a camogie team when Downey head-hunted him.

“I went in blind, to be honest with you,” says the 39-year-old looking back this week. “I had zero connection with camogie when Ann Downey gave me the call in 2019. You don’t realise the effort the girls are putting in. It’s the same as the lads. They’re on the pitch three times a week, in the gym another two times, they’re looking after themselves, giving up holidays, not going to weddings and things like that.

“I think it’s getting better but they can be looked after better. The lads get a lot more expenses and things like that. Our girls are very well looked after by Kilkenny county board. Anything that I ask for, we get. They’ve free membership into the gym in the Springhill Court Hotel, we’ve food after every training, food before and after every match. They’re little things I wanted to get changed as soon as I came in. I think it’s very important they’re well looked after, it’s the least they deserve.

“So I’m happy from a Kilkenny perspective but I definitely think camogie girls in general could be looked after a little better, though it is getting there, slowly but surely.”

If people outside the camp felt that this would be a trying year for the Stripeywomen, with the retirements of Davina Tobin and Collette Dormer, Meighan Farrell heading to Australia and then the Doyle sisters, Kellyann and Aoife suffering cruciate injuries – the former, like Galway’s Becky Hennelly, for a third time - integrating a new group has been a hugely positive experience.

The true tests have come off the pitch. March hit them with two overwhelming tragedies. First came the sudden death of coach, Tommy Shefflin’s brother, Paul at just 40 and then just three weeks later, Dowling’s uncle, Oliver Brennan died in a house fire from which his other uncle, Dom was lucky to escape.

“It was a huge blow when Tommy’s brother, Paul died. I would know Paul very well and would have marked him many times in club hurling. It was a terrible tragedy to happen.

“Tommy could see that the girls really rallied around him. They were all at the funeral and were there when Tommy needed them. My own uncle died as well and the girls were very supportive.”

In an interview in the Irish Independent ahead of the 2010 Leinster club hurling final that the Gaels would win, Dowling noted a sense of perspective he developed following a visit to a grave on county final day of another uncle who had died shortly after a brave battle with cancer.

Getting out on the pitch with a group of like-minded, committed people was a blessing, not cause for anxiety.

“It was great to have the camogie,” he says now. “It was something that we could cling on to.”

They have yet to lose a competitive game this year, missing out on a place in the League final on score difference to Cork. But they hadn’t been humming, unsurprisingly, given the significant transition.

But Dowling, Shefflin, Ray Challoner, Philly Larkin and Pat O’Neill had gone through this process very successfully in 2020 too, when they won the All-Ireland with five new players. They didn’t panic.

“We have a lot of new girls this year and the one thing when girls retire is new girls coming in bring a new lease of life into things. I think the likes of Denise Gaule, Miriam Walsh, Claire Phelan, Grace Walsh, girls that have been around a while, it kind of gives them a bit of a lift to see the new girls coming in as well.

“Our form wasn’t great during the League, we had a few disappointing results in challenge games and we were all wondering where we going. The Leinster Championship was crucial to this team. Normally we look at it as a way of giving girls game time and bringing up match fitness but we set our target to win it this year. We got confidence from that.

“We were very unlucky to lose the Doyle sisters during the year. That was the biggest disappointment. The other girls made the decisions themselves but Kellyann and Aoife were back training hard and probably in the form of their lives.

“For Kellyann to have a cruciate injury for the third time, it’s absolutely devastating. Anyone that knows Kellyann sees the hard work she puts in and I saw it myself first hand in 2020 to get back on the pitch, I think it was eight months from the operation, to play in the All-Ireland final. Just incredible.

“For it to happen to her sister Aoife as well, a freak accident against Limerick. I couldn’t believe our luck that day. Everything seemed to be going the wrong way. I have huge sympathy for Rebecca Hennelly and Orlaith McGrath who have done cruciates as well for Galway. You want to see the best players out there. But our girls stuck at it and whoever we have on the pitch, we’re confident that they can do a job.”

More than 1300 tickets were sold for the Glen Dimplex All-Ireland championship group game with Galway at Kenny Park and a thunderous affair ended in a draw.

“We went up to Athenry to test ourselves and see where we were at. It was probably one of the most enjoyable games in camogie that I’ve been involved in. It had everything. It was a huge Galway crowd, probably the biggest crowd I’ve seen at a game outside of big semi-final day or final day. It was just amazing, the atmosphere at the game.

“The last ten minutes there were some unbelievable scores. I don’t think I appreciated it till afterwards. The equalising point Áine Keane got (for Galway). Miriam Walsh had got a brilliant score off the sideline just before it. Áine Keane came off the bench, I think just a minute before, soloed down the line, bounced the ball off the ground and off her left hand side straight over the bar. It was an amazing score.”

The result meant Galway had the direct route to the semi-final with Kilkenny navigating the quarter-final path comfortably enough against Dublin after a slow start in Semple Stadium last Saturday.

“We’re looking forward to it and we know it’s going to be a huge test. Hopefully it’ll be a great day for camogie and there’s a big crowd at it. This is why we put in the hard work, for days like this.”