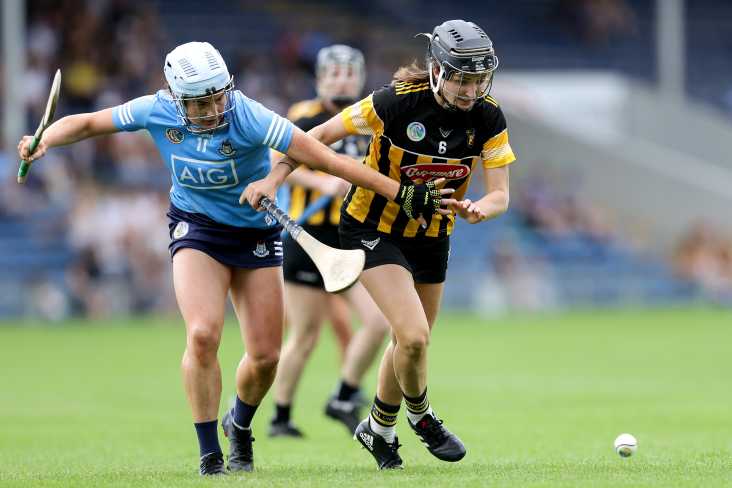 Kilkenny’s top-flight pedigree shone through as they responded to Dublin’s excellent start in ruthless fashion, going in at half-time leading by nine points having trailed by four and streaking clear for a convincing Glen Dimplex All-Ireland senior camogie quarter-final victory.

The Cats have lost a lot of elite players this year but the workrate that has been at the core of all they have done well over the past decade, not least when winning the All-Ireland in 2020. They forced Dublin into more and more errors as the game wore on and as a result, are back in the semi-finals, where they will renew rivalries with current champions Galway.

Dublin battled well in the second half and the potential they possess is evident, particularly given the progress that has already been made, and with the experience of operating at this level behind them.

Former All-Star Aisling Maher excelled from placed balls, Hannah Hegarty battled hard in the heart of defence and there were glimpses of the fairy dust Leaving Cert student Aisling O’Neill possesses though unfortunately Dublin couldn’t get her involved enough.

But cracks in their attempts to work the ball out of defence as Kilkenny put a squeeze on them, the likes of Katie Nolan and Julieanne Malone among the whirling dervishes causing mayhem.

The old reliables were at it too, Claire Phelan majestic as a plus-one defender with her fantastic reading of the play, Katie Power revelling in the freedom of midfield, Denise Gaule hitting 1-8 in the first half though her radar went astray a little in the second and Miriam Walsh at her rampaging best.

And that was more than enough.

It didn’t look like a 14-point game in the opening quarter. Gaule converted two early frees, the first after an intervention from Willie Barrett on HawkEye duty but Maher replied with two of her own.

Walsh and O’Neill swapped points from play before Niamh Gannon lashed home an outstanding goal in the 13th minute.

Elyse Jamieson Murphy took up possession around the middle and fed Emma Flanagan, who in turn sent Gannon on her way. The Naomh Jude centre-forward cruised into the space vacated cleverly by O’Neill and provided the definitive finish the move demanded.

Dublin were four points clear and belief was growing but Kilkenny extinguished the hope without fuss, scoring a goal and ten points without reply.

What was notable was that they didn’t go looking for the rapier thrust immediately, going for death by a thousand cuts, or eight points on the trot to be precise. Gaule chipped in with five of those, while Malone, Walsh and Mary O’Connell slotted through the posts as well.

The goal arrived from a 24th penalty, Gaule repeating her heroics from the All-Ireland final two years ago after Walsh was fouled.

It was 1-16 to 1-5 at the break and though the scoring rate slowed a little in the second half, as the intensity inevitably dropped and both sides emptied their benches, it was Kilkenny who always carried the most threat.

Walsh grabbed her goal in the 40th minute, after ghosting into oceans of space and being found by a ground pass from Gaule.

Gannon, Maher and O’Neill raised white flags for Dublin, though it was something they never did symbolically. It was just Kilkenny had too much power and firepower, O’Connell, Nolan, Gaule and Sophie Dwyer ensuring a saunter to the finish line.