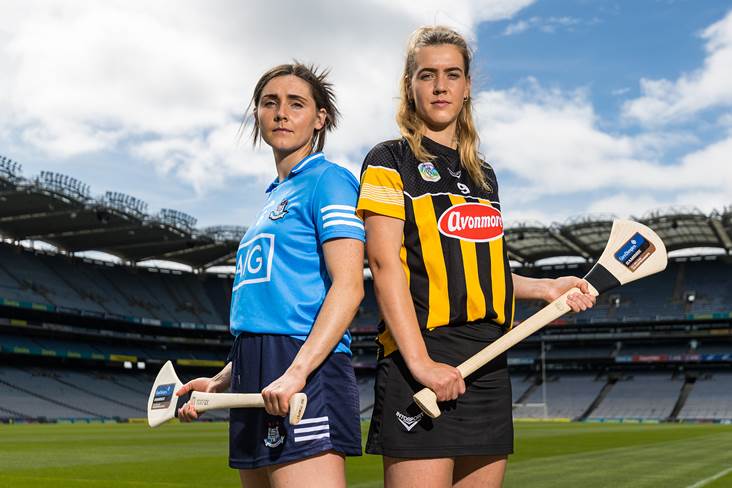 Captains Hannah Hegarty of Dublin and Aoife Prendergast of Kilkenny

A look ahead to the double header of camogie quarter-finals taking place in FBD Semple Stadium on Saturday.

This tie pits two teams against one another that recovered from subdued starts to build real momentum, including having to pull out all the stops in the final game of the round-robin series to make it through.

While Waterford are old hands of this stage of the Glen Dimplex All-Ireland Senior Championship, there have been a lot of changes in personnel from when they made the initial breakthrough under the stewardship of Donal O’Rourke in 2018. Having three different management set-ups in three seasons hasn’t helped continuity but Derek Lyons is in his second term now and has brought a good blend of youth and experience to the Déise.

Beth Carton, Niamh Rockett and captain Lorraine Bray are All-Stars, while Brianna O’Regan is acknowledged as a brilliant shot-stepper and among the premier goalies in the land. Abby Flynn is really beginning to make her presence felt now having been handed her debut by Fergal O’Brien as a teenager, while Mairéad O’Brien and Clodagh Carroll are other youngsters who have made major contributions through the summer.

Waterford were unable to make it out of a hugely competitive Division 2 of the Littlewoods Ireland National League and then began their championship campaign with a two-point defeat to Dublin at Walsh Park. An 18-point demolition of a Wexford team that defeated them in the Division 2 semi-final sparked a revival in fortunes however, and subsequent wins over Tipperary and Clare, either side of a six-point defeat to last year’s All-Ireland finalists Cork secured the runners-up position.

Limerick have had even more significant turnover in recent years, navigating not just the retirement of one of their greatest players Niamh Mulcahy after they last reached the quarter-final, in 2019, but also the unavailability of a number of other talented operators for a variety of reasons. John Lillis stepped up as manager this year having been a selector under Pat Ryan. The former Tipp boss also brought in Declan Nash, himself an ex-Limerick boss.

The League was a disaster and they were relegated to Division 2 with a whimper, losing by 13 points to Offaly in the play-off. In the circumstances, having to face Galway and Kilkenny in the first two games of the championship was hardly ideal and they lost both on an aggregate score of 5-32 to 1-13. A rematch with Offaly was next up and chiselling out a two-point victory over the midlanders flicked the switch for Limerick as they accounted for Down before leaving Dunloy with the vital victory over Antrim to claim their last-six berth.

Caoimhe Costelloe has been phenomenal for Limerick from frees and play and scored 2-10 of her side’s 2-11 in their five-point win over Down. The vastly experienced former skipper Lorraine McCarthy has had a considerable impact since returning to the fold and relocating from full-back to full-forward. Marian Quaid has the armband now and along with Muireann Creamer, is a resolute defensive presence. Neamh Curtin, Niamh Ryan and Rebecca Delee are other important cogs in the wheel.

Waterford have had the upper hand in recent battles and will be favourites given their superior experience to make a first ever senior semi-final. But Limerick are on a roll and possess enough tools to make their own mark.

There were many murmurings about Kilkenny at the beginning of the championship, with two all-time great talents of the game having retired in Davina Tobin and Collette Dormer and another defender and totemic figure, Meighan Farrell taking the year out to go travelling. This remember, not long after Kilkenny had seen Anne Dalton and Anna Farrell walk into the sunset. Meanwhile, the Doyle sisters Aoife and Kellyann and Niamh Deely have been ruled out with injury, Kellyann Doyle falling foul of the dreaded cruciate curse a third time.

With that in mind, their performance in forcing Galway to need an injury-time equaliser to snatch a draw and top spot in the group on score difference spoke volumes for the spirit in the camp, the leadership of Denise Gaule, Grace Walsh, Miriam Walsh and Claire Phelan, the impact of newbies Tiffany Fitzgerald, Michaela Kenneally and Aoife Prendergast and the management/coaching prowess of Brian Dowling, Tommy Shefflin and co. The return to the fray of Julieanne Malone after a few years out of the scene has been influential too.

Prior to the humdinger in Kenny Park, the Cats had totted up 6-76 in accounting for Down, Limerick, Antrim and Offaly. They got very close to that average in shooting 2-14 against the All-Ireland champions. The Stripeywomen remain major contenders for overall honours.

Dublin have been the great puzzle of camogie with huge potential in terms of the club game and a booming population but an inability to find consistency. Even in the context of the normal challenges that exist when it comes to player retention, they have struggled in that regard. Like a few teams, they weren’t helped by the constant chopping and changing of managements after David Herity moved on. The former Kilkenny All-Ireland winner steered Dublin to the All-Ireland semi-final in 2017 and was in charge when they last reached this stage of proceedings 12 months later.

Adrian O’Sullivan has had time to erect building blocks since taking over as boss with incremental improvements visible throughout his term. With stars of the 2017 campaign such as captain Hannah Hegarty, Aisling Maher, Emma Flanagan and Ali Twomey on-field generals, and enthusiastic operators of the calibre of Niamh Gannon, the Couch siblings Gaby and Jody, and Issy Davis around them, and a potential superstar of the code in Aisling O’Neill announcing herself in the midst of her Leaving Cert, they have returned to the top six.

They made their mark immediately when taking Waterford’s scalp at Walsh Park before being held to a draw by Tipperary. They were right on Cork’s coattails for a long way before the Rebels pulled away to win by seven but then let a five-point lead slip to finish with a share of the spoils against Clare. That left them vulnerable in an extremely tight Group 1 and trailing Wexford at the interval, their aspirations hung by a thread. O’Sullivan made some astute switches and the players responded with four goals, including two from Davis, and the subsequent nine-point victory secured them the coveted quarter-final berth due to having a better score difference than Tipperary.

This, one suspects, is just another step towards the ultimate aim for O’Sullivan and Dublin, but one imagines they will be more competitive than was the case in the Leinster Final last May. On that occasion Kilkenny hit the Blues for five goals, three in the first half and two in the first six minutes of the second and it was a 14-point margin at the final whistle. The Noresiders will be warm favourites to prevail again this time but expect Dublin to throw everything at them.