"If you need help, even if you've a friend to talk to, you have to" 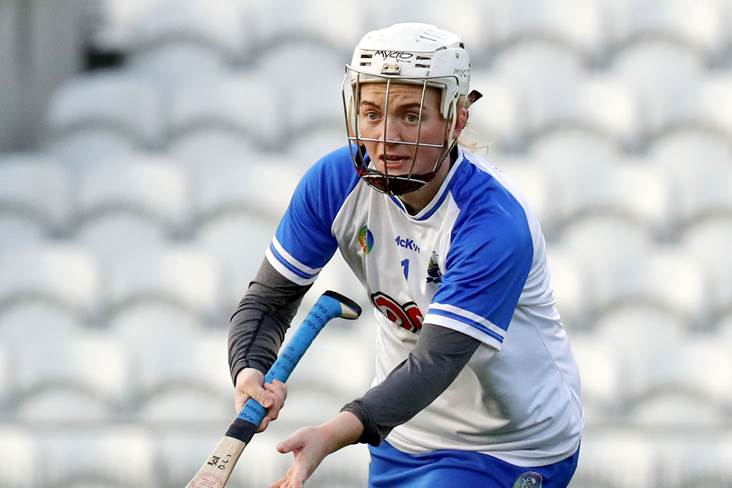 It wouldn’t surprise Brianna O’Regan if she were the topic of conversation among match officials on lifts home after games, with umpires regaling their colleagues of her constant chatter.

Whether it’s asking them what time is left, offering her defenders constant and vociferous encouragement, or issuing instructions to herself, it doesn’t really stop.

“I think I’ve a bit of a mad streak in me,” says a chuckling O’Regan, happy to play to the stereotype of goalkeepers being a little different to the rest of the pack, appropriately shadowed by people in white coats.

“It’s you and the two posts at times. I’d be talking to myself and probably the umpires are saying, ‘This wan’s a mad wan,’ but you have to have a different mindset to the outfield players… Poor (full-back) Iona Heffernan, I’d say her head is fried!”

Extroverted by nature, a wisecrack is never far from O’Regan’s lips. It would be a mistake to think the 23-year-old saunters through life with a devil-may-care attitude however.

She is deadly serious about her work as a special needs assistant at St Stephen’s De La Salle - “I love it” - and about honing her craft as a netminder. She has been as consistent as any in the land over the past three years, despite not picking up an All-Star gong, with her accurate and lengthy puckouts a key weapon in the Waterford armoury. The spectacular shot stopping places her on an elite level, however, and the penchant for saving penalties is particularly notable.

But life is for living and she is all about doing that. Just like her camogie and profession, reaching this point in her personal life has taken plenty of work, including counselling.

O’Regan admitted on WLRFM after Waterford’s Glen Dimplex All-Ireland senior camogie championship victory over Tipperary last June, that the following day would be “very hard for me”, as it marked the anniversary of the tragic death of her parents Bryan and Johanna, and 21-month sister Niamh in a house fire at their home in Ballybeg in 2006. Brianna and her brothers Cian and Aaron were lucky to escape. She was seven years old.

The support network in terms of family, community and the Gaelic games family was critical but so too was professional help. She emphasises the importance of talking, to anyone, rather than bottling up anxiety or fear, whatever the cause.

The De La Salle custodian said in an interview with this writer a couple of years ago that camogie, and greyhounds (more of which anon), saved her life because they gave her an outlet. But talking about what happened and how she felt about it was the foundation stone of her growth.

“I had great help, especially up in the club with (Carton father and daughter) Joey and Beth. They’ve been there through it all with me. To be honest, I don’t think I’d be up in De La Salle if it wasn’t for the two of them. I owe them a lot as well.

“I’ve often been up in Joey’s house, many a time, and had great chats with him. I went down for a chat with him before the county final last year. I’ve great time for Joey.

“You wake up and it kinda hits you then but you have to deal with it and take every day as it comes because unfortunately, life don’t stop for ya and you just have to get on with it. Thankfully I’ve had both my grandparents with me the last 16 years. I’m very thankful for that.”

Bryan’s parents, Patrick and Joan, are hale and hearty.

“They’re flying. No fear of them. Grandad was 80 in May. It was so eerie (during Covid) ‘cos Grandad would have such an outlet with the greyhounds and he wouldn’t have been able to go anywhere. They got Covid after Christmas – I didn’t get it, I don’t know how I didn’t but they were grand. We were just making sure they were okay.

“We have a good few dogs now between the greyhounds and the Kerry Blues (terriers). My grandad loves them too. He has them in top order. He’s clipping them and washing them nearly every day. He’s after winning many a trophy and many rosettes. He’s a top class judge as well and I’m not being biased because he’s my grandfather. He’s judging all over the country and in England. He’s after being at Crufts looking at dogs.”

Meanwhile, she likes to think her parents and baby sister are looking after her.

“They’re always with me, especially on match days, especially my dad because he was a hurler. If you say a word or two to them and it’s like, ‘Oh yeah, they’re there.’ It’s great to feel that.

“You have to find that (emotional) balance, especially in big matches you’re coming up to. All the rest of the girls’ parents are there and that can be tough but I’ve great people around me. It’s tough when you’re winning and they’re not there but you know you’re doing them proud.”

And how. She joined the Waterford panel as a 16-year-old.

“I’m on the adult team for the last seven years so I feel like I’m around for ages. I have a scrapbook at home. The grandmother would often cut out pictures and articles that are in the newspaper to hold them and she’d often give them to me. You look at it then and look at how old you were – you were only a little pup! But you look back on how much you’ve matured and how much you’ve grown as a player and a person.”

It was a novelty in 2018 when Donal O’Rourke steered the first Déise team to get that far. Yet half that unit is gone and some quality operators are unavailable again this year for a variety of reasons. But O’Regan, Beth Carton, Niamh Rockett and Lorraine Bray are now experienced players, O’Regan’s 20-year-old clubmate Abby Flynn is really flourishing in her third season while teenager Mairéad O’Brien is among the newcomers to really step up to the plate.

From the start, it was clear that their group would be very difficult, and the denouement confirmed the notion. So much remained at stake right down to the final minutes, when O’Regan made a brilliant save from Clare’s Muireann Scanlon and Iona Heffernan blocked Chloe Morey’s goalbound shot. Had the net rattled, Waterford would have been out. Instead it was Tipperary, semi-finalists for the past four years, whose season was over, despite beating Cork.

“It was completely nerve-wracking,” O’Regan concedes of the high-pressure affair.

But she possesses the mental tools as well as the goalkeeping skills to deal with that now, benefiting from the coaching received over the years from the likes of the unrelated Ian O’Regan, her boyfriend Sam’s father, David Robinson, and this year from David Payne of Peak Fitness.

And then there is what she has trying to take on board what she can from watching videos of Wexford legend Mags D’Arcy and Tipperary hurling great Brendan Cummins.

“I was talking to Brendan Cummins last year. We had a great chat out in Carriganore. I got a few insights to his game and his pre-match stuff. It was great to have a good chat with him.”

She plays down the save against Clare and credits those in front of her for ensuring she hadn’t much to do but not being busy makes the stop all the more noteworthy.

And now, here they are. A year that included defeat to Wexford in the Division 2 Littlewoods Ireland National League semi-final and then a loss at Walsh Park in the opening round of the championship to Dublin, has been turned around, an 18-point hammering of Wexford infusing them with belief.

“We were in transition for a couple of years but we still got to a quarter-final but there’s senior players that have been there for a lot of it so I suppose it would be nice to push on and hopefully that will be Saturday.”