"It's brilliant to see Limerick hurling where it is now. It spurs everyone on" 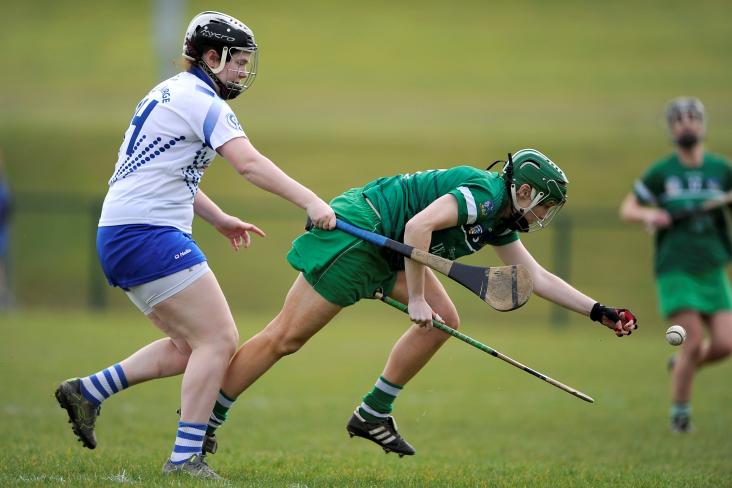 The buzz in Limerick is centred almost entirely around the hurlers ahead of their All-Ireland final this week, but not exclusively so. Indeed there has been tangential interest in the other Gaelic games codes and the camogs have felt that too.

Caoimhe Costelloe has garnered most of the headlines, establishing herself as the competition’s leading scorer while helping to propel the Treaty County’s camogs tomorrow’s Glen Dimplex All-Ireland quarter-final against Waterford at FBD Semple Stadium (3.15pm – LIVE RTÉ 2).

But it is Lorraine McCarthy who has provided one of the real uplifting stories of the campaign to date.

After years manning her own square, former skipper Lorraine McCarthy is now causing difficulties on the edge of the opposition area. It was notable, for example, how the Bruff veteran’s movement made space for Costelloe in the season-defining defeat of Offaly, and how the chief markswoman timed her runs to arc around the attack’s new focal point when the full-forward won possession.

Given that she has suffered two cruciate knee ligament injuries and a slew of other issues including ankle, hamstring and quad, it is a testament to McCarthy’s brain that she has made the seamless transition, and to her steely resolve that she is still around to do it.

There are a number of reasons why this naturally bubbly individual might have called time on Limerick, as she closes in on her 32nd birthday. All those she had started with in 2011 are long gone. Then there are the injuries and her work as a hospital nurse which was in no way conducive to being at her very best.

But it gnawed away that she hadn’t really been able to deliver her optimum for a while and so she kept rocking up.

A new job was a good start, and she is now working nine-to-five at LIT. Manager, John Lillis emphasises the short-term goals of getting her training for consecutive sessions and doing what was necessary to make that happen. Declan Nash, who was Limerick’s first S&C coach before coming in as manager, and who helped her in her cruciate rehabs along with the late Mark van Drumpt, has been doing the coaching along with Darragh O’Grady. They’ve managed the loads and she is in her best shape for years.

“It was a very gradual build-up. The odd time, John would give me an extra night off or just pull me out before the end of training. That kind of management has been excellent and I haven’t been picking things up. It’s great.

“I guess I do love it. There’s something about it, something even about the routine of it. I’ve always wanted to play the camogie and the level you can play at and level of training.

“On top of that, though I’m the oldest, there’s a group that have been there for years. If you walk away, that group of friends is still training every night of the week but you’re totally out of the loop. You’re so used to it but you want to hold onto it as well.

“You want to win things too and I missed a good bit with the two cruciates and a load of other niggly injuries that didn’t clear up. I never got a run at it. You’re coming back going, ‘Surely this year I’m coming back in good condition, I can get a run at it,’ and I didn’t. This is the first year I’ve had a run at it in a few years where I’ve been consistently able to train. And I think you crave wanting to come back for that as well. To get a run at it and see maybe then what I can do, and what I can get out of myself.”

The first cruciate went in 2013 against Cork in the championship – Limerick were intermediate then. That meant she had to look on as the Shannonsiders lost the All-Ireland final.

She returned to the fray in 2014 and played as they went one step further and returned to the senior grade. That was actually her first exposure to the attack, Joe Quaid and his mentors reasoning that it would place less strain on her in terms of being able to choose her runs and angles of running, rather than having to react to what the opposition forward was doing if in her customary role.

The other knee went in 2016. As has always been the case, the support was excellent and she was back for 2017.

“I got a championship start but I didn’t have enough game time. I was at corner-back and I got roasted. I had played one challenge match. That knocked my confidence a bit.”

Her knees have never given her any bother since the injury – it’s just everything else. But 2022 has been kind and she is very disciplined in her extra activation work with the bands and for her dips in the sea in Kerry or Lahinch, or Lough Neagh in Killaloe or Morning Star River in Bruff.

Working regular hours has been a huge help.

“It was impossible. I used to get off night duty and I’d be playing a championship match after about two hours’ sleep!” she says, with a hearty laugh.

Though her parents both played locally, the McCarthy doctrine wasn’t a cult when it came to Gaelic games. They were playing tennis the two weeks of Wimbledon. The Olympics heralded the construction of temporary running tracks. But GAA and camogie were constant.

“I’ve two brothers. I was the youngest so I was kind of their guinea pig. I used to be their training project. They put me in goals with the helmet on. You’d be out all hours of the evening. There wasn’t too much television anyway!”

The project has proven a success with the mind as well as the skills of a future Limerick skipper moulded by the older siblings. It is clearly evident in her new role.

“I am enjoying it. If you’re on the starting 15 you’d take any jersey. Any scores that we’re getting, it always has to be a team effort as it’s coming from somewhere. It’s coming from the player in goals, full-back line, half-back line, midfielders. Everyone has to work to get a score. If you don’t work as a team, you’re not going to be scoring. Whoever gets it, lays it off, that’s all you want. Once it goes over the bar or into the net, nobody cares who gets it.”

While the hard-earned victory over Offaly, who had relegated them in the League, was the result that turned their season, the confidence was buoyed before that by their first-half competitiveness against Galway, when the All-Ireland champions only scored 2-1 before pulling away.

The bounce in training was noticeable after beating Offaly though and they recovered from slow starts to get the better of Down and Antrim subsequently.

“Antrim was very tough, right down to the last minute. People on their hands and knees trying to get on the ball. Down on the ground and people still trying to get it. Ferocious hard work.”

They celebrated after that, taking the train to Dublin to take in the hurlers’ semi-final.

“It’s brilliant to see Limerick hurling where it is now. It spurs everyone on. We’ve noticed since making the quarter-final there’s a lot of interest, playing the Saturday before the All-Ireland. There’s been a good bit of publicity, it’s on local radio and stuff like that, so people seem to know about it which is nice.”

Waterford are familiar opponents and McCarthy expects it to come down to fine margins. Whatever the measurement, we know she won’t be found wanting.