PwC Players of the Month announced for June 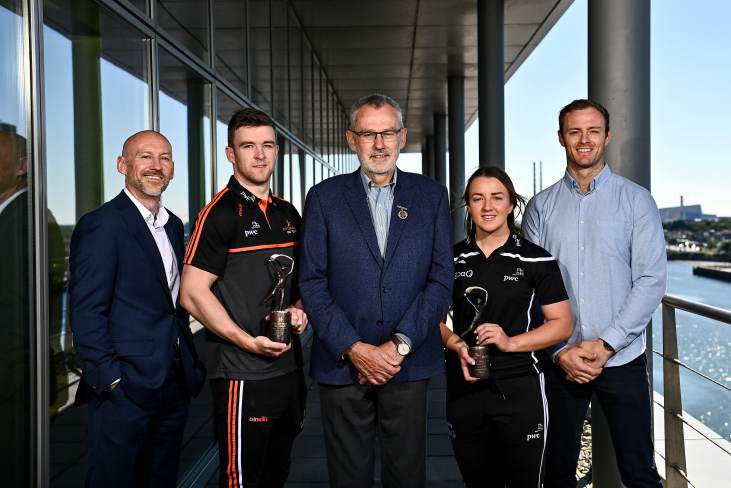 Uachtarán Chumann Lúthchleas Gael Larry McCarthy, centre, with, from left, PwC Tax Partner Ronan Finn, PwC player of the month for June in hurling Tony Kelly, and player of the month in Camogie Caoimhe Costelloe and co chair of the GPA National Executive committe Matthew O'Hanlon at the PwC Office in Dublin.

Tony Kelly (Clare) and Cillian McDaid (Galway) are the PwC GAA/GPA Players of the Month Awards winners for June in hurling and football respectively.

Kelly provided one of the stand-out moments of the summer so far when he launched over a brilliant sideline ball to send Clare’s Munster final with Limerick at Semple Stadium to extra-time. They went on to lose that game, but he was again to the fore as the Banner beat Wexford to make the All-Ireland semi-final.

McDaid was man of the match as Galway beat Armagh in a thrilling All-Ireland quarter-final at Croke Park, another game that went to extra-time. He scored 1-2 from play in an amazing contest that was eventually decided on penalties.

O’Sullivan was in free-scoring form throughout June and her stand-out performance of the month came with a 1-7 contribution in a win over Waterford which secured Cork’s place in the All-Ireland quarter-final.

Costelloe’s displays were key in Limerick’s progress to the All-Ireland quarter-finals, including her 2-10 against Down (1-2 from play), with Waterford awaiting in the first knock-out round.

Commenting on the announcement, Feargal O’Rourke, Managing Partner, PwC, said: “All of us at PwC are delighted to give our sincere congratulations to Doireann, Caoimhe, Tony and
Cillian on being named winners of the Player of the Month awards for June.

“Each of them showed outstanding performance for their counties, key in securing victories as part of a team. We wish all of them well for the rest of the season, be that with club or county.

“We are so proud to partner in this award scheme, which acknowledges the skill, efforts and dedication of male and female players across Gaelic Games equally, something that reflects our own values as a firm.”

Uachtarán Cumann Lúthchleas Gael, Larry McCarthy said: “As the intensity of the Championships has increased, so too, have the feats of skill and levels of performance on the field, and I congratulate Tony and Cillian on their selection as PwC GAA/GPA monthly awards.

“Both players stood out for their match-defining contributions at pivotal moments in big games. It is the hallmark of what being an All-Star is all about and I want to thank PwC for their support of this prestigious scheme.

“Congratulations also to Doireann and Caoimhe on their selection and being recognised for their impressive scoring feats.

“An excellent Championship is building up to an exciting finish and I look forward to seeing the drama unfold in the weeks ahead.”

Speaking on behalf of the GPA, Matthew O’Hanlon, Co-Chair of the GPA’s National Executive Committee said: “First and foremost I want to congratulate the four winners. I have been watching on and Cillian, Doireann and Caoimhe have been in great form all season but particularly last month and they should be very proud of having their performances acknowledged by their fellow players with these awards. I have first-hand experience of coming up against Tony and he has been outstanding again in 2022.

“Thank you to PwC for your ongoing support of inter-county players.  You do so much for players and I want to thank you as well for your support for our Development Day coming up later this month.  And thanks as always to the GAA for your partnership in this awards scheme.”

The PwC GPA Women’s Player of the Month and PwC GAA/GPA Players of the Month Award winners are voted for by the GPA’s membership.