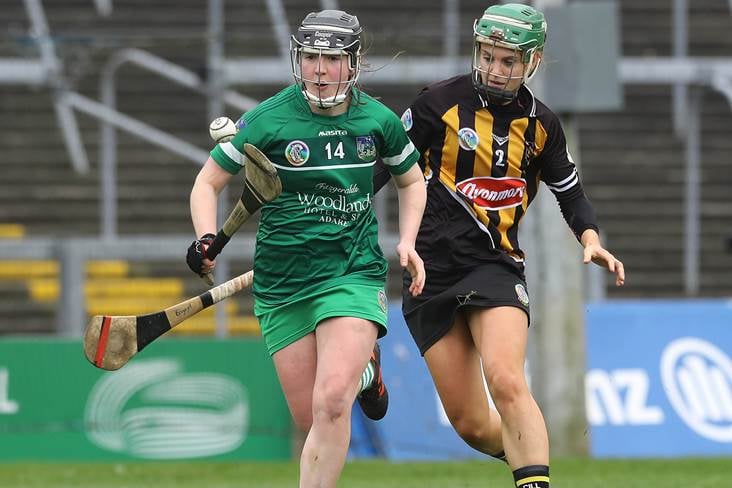 Limerick kept their hopes of making the knockout stages of the Glen Dimplex All-Ireland Senior Camogie Championship alive with a strong finish to prevail 0-11 to 0-9 over Offaly in their Group 1 tie at Cappamore GAA.

With Galway and Kilkenny assured of advancing to the last six as a result of their triumphs against Down and Antrim respectively, there is just one qualifying spot up for grabs.

While Offaly aren’t out of contention yet, they have lost all three of their outings and prop up the table with Down just ahead on one point. Limerick are now on three points, behind Antrim, who retain third spot on four points.

Offaly were the superior side in the first half, at the end of which they led by 0-6 to 0-4. A Christine Cleary point soon after the restart stretched the advantage but Limerick came roaring into it thereafter, Costelloe shooting six points in the course of bringing her tally to nine, to drive the Treaty County women to a brilliant victory.

Points from Aisling Brennan, Sarah Harding and Mairéad Teehan edged the visitors in front after 15 minutes and though a converted free and 45 by Costelloe gave Limerick a temporary lead, scores from Sarah Walsh, Harding and Siobhán Flannery made a two-point game at the change of ends.

As Limerick exerted more pressure, Offaly started conceding frees and Costelloe punished them for that, pushing her side ahead in the 47th minute. Brennan and skipper Róisín Egan equalised after further Costelloe scores but they had no answer to the final Costelloe brace, Harding’s injury-time sending off the final blow.

Champions Galway continue on their merry way, producing a lethal first-half performance before dispensing with Down by 3-23 to 0-6 at Kenny Park, a result that sees them overtake Kilkenny at the top of the group on score difference.

The Cats retained their perfect record but had to sweat before getting the better of Antrim in a far more competitive affair at the Dunloy Cúchullains grounds, by 1-15 to 1-9.

Galway have been workmanlike in the opening period in their previous triumphs over Limerick and Offaly but Cathal Murray would have been far happier with his players’ level from the outset of this tie as they led by 2-17 to 0-0 at half-time.

Down actually held the Maroons to three points from Niamh Kilkenny, Rebecca Hennelly and Ailish O’Reilly in the first ten minutes but Sabina Rabbitte, Aoife Donohue and Carrie Dolan were among those to add their names to the scoresheet as the margin stretched to ten by the end of the opening quarter.

A trademark two-point sideline from Hennelly also wowed and the floodgates really opened from there to the interval, goals in the next five minutes from Hennelly and Niamh Hanniffy pleasing the home support, while O’Reilly brought her own tally to six points.

Down were better in the second half with a very strong wind in their favour and Niamh Mallon finally got them on the board from a free in the 34th minute. The fabulous Portaferry player clipped five of her side’s points, with two of them coming from play, while Aimee McAleenan also split the uprights.

Hennelly finished as top scorer for Galway with 1-5, 1-3 from play, while O’Reilly registered seven points, three from play and Donohue shot four. Niamh Kilkenny pounced for a third goal in the 54th minute to send the home support away happy.

The clash between reigning intermediate champions Antrim and the 2020 senior queenpins Kilkenny was a highly entertaining one that started with a bang as Miriam Walsh powered through before goaling in the fourth minute.

Though Róisín McCormick and Caitrin Dobbin pointed for Antrim, they still trailed by seven points mid-way through the opening half. They began to gain more traction around the middle as the game wore on however and a 21st minute goal from Dobbin, who was sent clear by Lucia McNaughton, brought the Saffrons to within touching distance at the interval, just 1-7 to 1-5 in arrears.

Kilkenny doubled that lead in the next ten minutes but when Mary O’Connell was sent off and the margin at just four with 20 minutes remaining, the potential for a shock seemed on the cards.

Points from Denise Gaule, Walsh and Julieanne Malone, who scored three as she continues to impress on her return to the squad after a lengthy absence, gave the Noresiders vital breathing space, however.