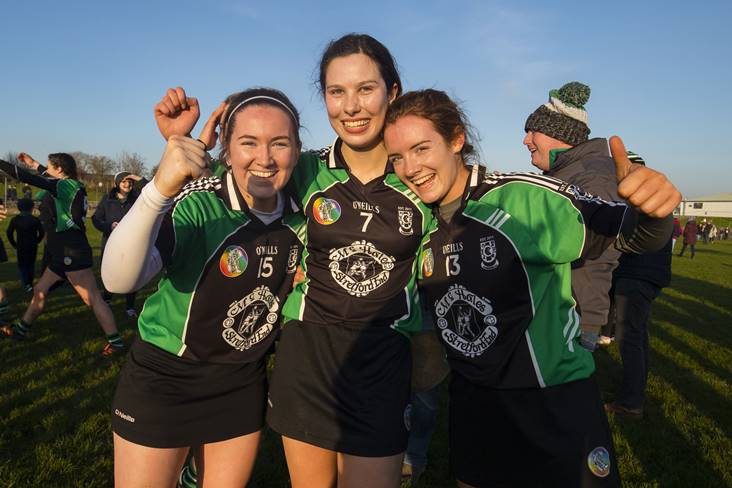 The end of a 128-year drought is how Clanmaurice manager Mike Enright described his team’s 3-6 to 0-6 victory over Raharney in yesterday’s AIB All-Ireland junior camogie final replay at McDonagh Park in Nenagh.

“This is the first All-Ireland since 1891 for a Kerry club team, since Ballyduff won it. And today, a Ballyduff woman has captained a Kerry camogie team to an All-Ireland title again, after waiting 128 years!” said the visibly ecstatic manager, before hailing an incredibly final quarter in which his charges scored 2-4 without reply.

“I felt we burned ourselves out a little bit in the first half the last day and didn’t put it on the board” he said, referring to the 2-7 to 1-10 draw seven days previously.

“We brought down Brendan Cummins for a chat on Friday night, he talked for about fifteen minutes and got inside their head how you win these games, and it worked today for us”.

“We had our minds made up all week, we let them in too easy last day for two goals, we were not going to give a goal away today”.

Certainly strong defensive play was the order of the day in Nenagh as both sides struggled to get clean possession close to goal.

Raharney tried to employ a running game, exploiting the youth and pace of their forward division, but they ran into a brick wall in the shape of Clanmaurice captain Liz Houlihan at the edge of the square, who repelled wave after wave of attack.

Still, three frees from Pamela Greville, to of them earned by strong running from Aoife Doherty, put them 0-3 to 0-1 in front after 20 minutes.

“We should have been up more at half time. We dominated possession for 20 minutes and I looked up at the score board and we had only three points scored. If we had taken our opportunities, maybe it would have turned around, but they were the best team in the second half” admitted Raharney manager Padraic Connaughton afterwards.

1-1 from Saidhbhe Hogan meant the Kerry side turned around 1-2 to 0-4 in front, but when Andreanna Doyle fired over their only score from play after six minutes of the second half, it looked like a real battle was in store.

Their crucial score came from Jessica Fitzell, who a week ago was the player who scored a sensational equaliser in the last minute of stoppage time. Her close-range goal put Clanmaurice four up, and a superb solo run and finish from Rachel McCarthy in the 23rd minute was the cue for the club’s supporters to begin celebrations.

For Enright, it was the end of a five-year journey, though he said that for Clanmaurice camogie and for Kerry, who won a county junior title this year, the best is yet to come.