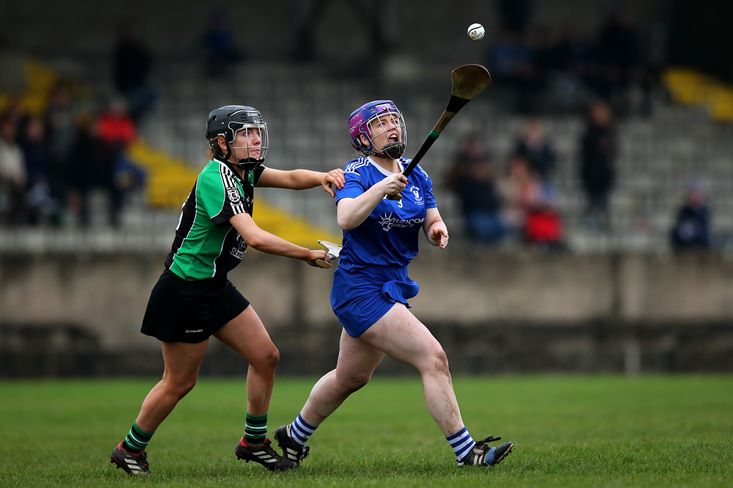 There were dramatic scenes in McDonagh Park in Nenagh this afternoon as Clanmaurice and Raharney played out a thrilling draw in an AIB All-Ireland Junior A Club Camogie Final that can only be described as a real game of two halves that means there will be a replay next Sunday.

Jessica Fitzell was the last-minute hero for Clanmaurice as she produced a heroic block on a Raharney clearance in the fourth minute of stoppage time, and then followed up by winning possession and splitting the posts from 50 metres out, with two Raharney defenders making despairing efforts to preserve their one-point lead.

It was Raharney’s only lead of the game and it as a situation that seemed all but impossible after the first half hour, when Clanmaurice were utterly dominant.

Patrice Diggin and Laura Collins controlled the midfield battle and helped their side rattle over seven first half points, six of them from Diggin. Raharney ended the half with just two scoring chances – their very first attack after 20 seconds that saw Elaine Finn sweep a breaking ball over the line for a goal from close range, and a Pamela Greville penalty that was blocked by Aoife Fitzgerald in the Clanmaurice goal and swept clear by Sara Murphy.

No points, no wides and no shots dropped short, illustrated just how dominant the Clanmaurice defence was in that period, led by their imperious captain, Liz Houlihan at full-. Their only negative was that their lead (0-7 to 1-0) was far less commanding than their general play.

Raharney needed to make dramatic changes after the break and they made one crucial switch by moving wing-back Amelia Shaw to centre forward, getting them more traction in that key position, but they also reappeared with a completely different mindset.

Amée Nea set up Erin Core for a goal in the sixth minute of the half to pull them back on level terms, but they had to do it all again when Diggin stood over a free from 45m out and hit a shot that dipped wickedly at the last second, creeping into the top corner of the net.

Raharney’s response was exemplary. Shaw won a free that Greville converted, Greville added another dead ball score, and then Core struck a superb point from the right corner to draw the sides level.

Frees were exchanged to make it 2-6 to 1-9 going into the last 10 minutes, and that was still the state of play as the match crept into stoppage time.

A long ball into that right corner for Core and Maria Kelly to chase yielded what looked like the winning score for Greville, all the more when Clanmaurice had “their chance” and Collins snatched the ball wide from close range.

Thankfully from their point of view, Fitzell wasn’t about to accept defeat, and her magnificent block and point keeps this championship running for at least another seven days.

Meanwhile in Athleague, a successful winter season in East Mayo continued when Na Brídeóga edged out Denn of Cavan by 3-7 to 1-9 in the AIB All-Ireland Junior B Club Camogie decider. Not to be outdone by their Tooreen male counterparts, who picked up a Connacht Inntermediate title recently, Na Brídeóga did just about enough in the final quarter to edge out a valiant challenge from Denn.

Midfielders Erin Murray (0-2) and Meabh Delaney (0-3, 0-2fs) did all their scoring in the first half as they took an 0-5 to 0-2 lead into the dressing room, and that was doubled thanks to a Niamh Greally goal early in the second half.

Denn rallied however, and a Hannah Fitzsimons goal helped them to get on level terms, 1-6 each. An opportunistic goal from Murray meant that Na Brídeóga moved back in front however and while a series of dead ball scores from Shanise Fitzsimons cut the gap right back to the minimum, a third Na Brídeóga  goal from the stick of Delaney settled the contest.