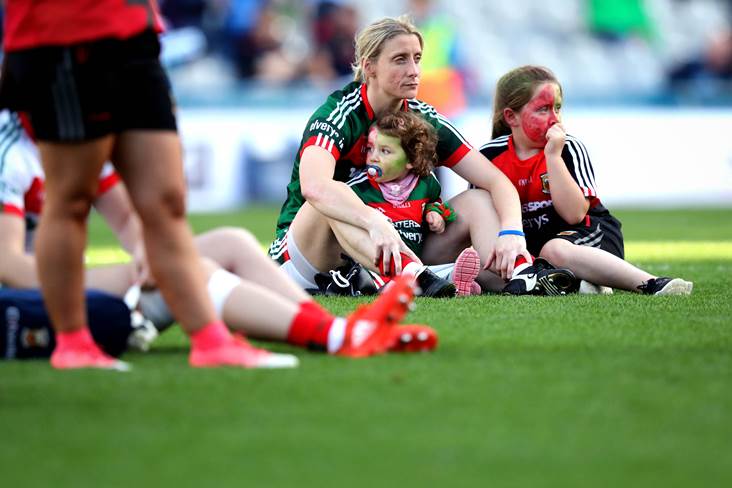 It is understood that the former Mayo star sustained the injury after a tackle during the third quarter of the Bulldogs’ game against Macquarie University.

Her AFL side GSW Giants confirmed the news with a statement on their website this morning, adding that the 37-year-old is set to undergo surgery on her right leg.

“The GIANTS can confirm that AFLW forward Cora Staunton has broken her leg while playing in the AFL Sydney Premier Division Women’s competition on Saturday,” the statement read.

“The Irish import was playing for UNSW-ES Bulldogs when she was injured in a tackle midway through the third quarter of their clash with Macquarie University.

“Initial scans have confirmed that the Gaelic Football legend has broken both the tibia and fibula bones in her right leg.

“Staunton – who recently signed a new contract to play with the GIANTS in the 2020 AFLW season – will have more tests to establish the full extent of the damage.

“The GIANTS’ medical staff is working closely with Staunton with surgery expected in the coming days.

“Staunton has been a mainstay of the GIANTS’ AFLW line-up over the past two seasons, kicking 11 goals in 14 games.”

These past two seasons have saw the four-time All-Ireland winner featuring prominently for the Giants’ AFLW side, hitting 11 goals in 14 games.

Cora Staunton has suffered a serious leg injury while playing for UNSW-ES Bulldogs in the AFL Sydney competition.

The GIANTS family is sending all its best wishes your way Cora.#NeverSurrender