FL2: Lilywhites blown away in Armagh 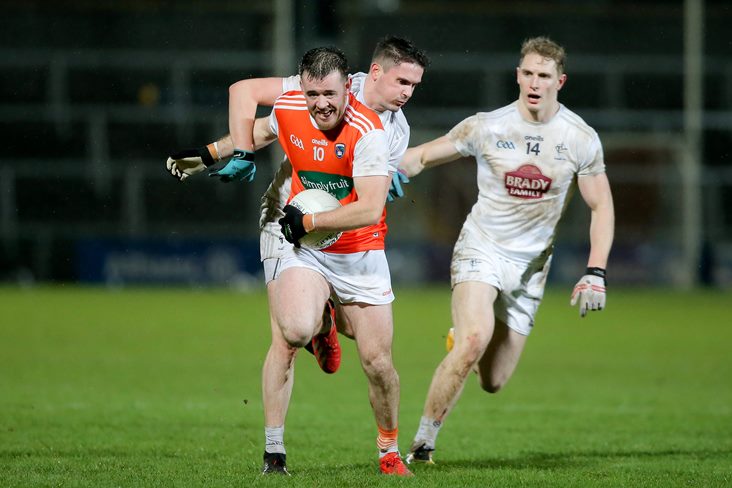 Fourteen-man Armagh defeated Kildare by 0-16 to 0-10 in a crunch clash played in atrocious conditions at the Athletic Grounds.

Despite having substitute Jamie Clarke sent off shortly after the restart, Armagh won at their ease, returning to winning ways following their disappointing defeat to Laois last weekend. This victory leaves Kieran McGeeney’s charges top of the Division Two table overnight.

Elements behind them, Armagh bossed the first half to lead by 0-8 to 0-1 at the short whistle. Clarke departed the fray three minutes after the restart but the hosts landed four unanswered scores to lead by eleven and there was no way back for the Short Grass County.

On a horrendous night for football, with the goal posts at the city end of the grounds swaying in the wind and the pitch itself having been subjected to not one but two inspections prior to throw-in, Aidan Nugent (advanced mark) opened the scoring and Paul Cribbin replied with the away side’s sole first-half point.

Stefan Campbell was on hand to restore the hosts’ lead after Mark Donnellan brilliantly denied Nugent a goal, Niall Grimley the man to make it 0-3 to 0-1 after 21 minutes. There were late changes to both teams, with Aidan Forker replacing Brendan Donaghy, Jarlath Og Burns coming in for Greg McCabe and Nugent replacing Jason Duffy in the Armagh starting XV while David Hyland and Tommy Moolick replaced Johnny Byrne and Liam Power for Kildare.

Forker (free), Oisin O'Neill and Campbell extended the lead further and a brace of injury-time Clarke efforts ensured that there were seven between them at the turnaround.

Kildare had the backing of the gale force wind when the action resumed but the Orchard kicked on with the next four points from Rian O’Neill (two), Stephen Sheridan and Nugent, taking their unanswered scoring streak to 0-11, although the dismissal of Clarke for a second yellow-card offence was not part of the script.

Points from Paddy Brophy and Adam Tyrrell kept the visitors’ side of the scoreboard ticking over but Jack O'Connor's team never looked like getting anything out of this game.