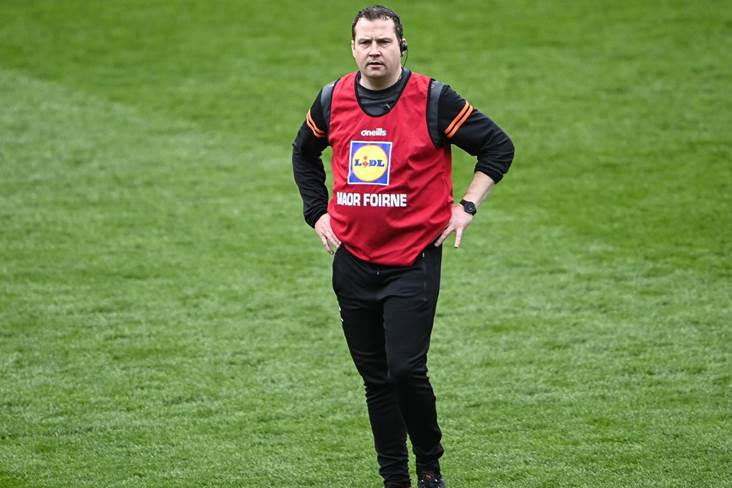 Just over 16 months on from hosting a maiden game at the facility, Armagh LGFA recently reached another milestone in the ongoing development of their McKeever Park training base.

June 20 last year was the date for a clash between the county’s U16 team and their Ulster rivals Antrim at the Killean venue - the only one of its kind across Ireland that is solely dedicated to Ladies football. As historic as this moment was, however, it only represented an early phase of the Armagh board’s ambitious plans for the site.

The next big leap forward for McKeever Park arrived last Friday week, when newly-installed floodlights were turned on for the very first time at the ground. Shane McCormack will be the first senior manager within the Orchard County to avail of this fully-lit surface, albeit it has been used by the squad on a semi-regular basis since April of last year.

He outlined how much of a game-changer it could be for not just Armagh, but the sport of Ladies Football as a whole.

“We’ve a fantastic county board and it’s headed there by [chairperson] Sinéad Reel. The work that woman has done is unbelievable for Armagh ladies. At the start of the year we wouldn’t have had the lights. For pre-season training, we would have had to go to different places in Armagh for lights. Wolfe Tones and Silverbridge were very accommodating," McCormack explained.

“It’s great. You can just arrive there now and have our own lights for the pre-season training. It’s so important for the development of the ladies game. I know a lot of counties have plans in place to follow us, which is brilliant.

"It needs support, the support has to be there. We’re very lucky at this time with the work Sinéad and her team have put in the last couple of years. It’s very exciting for the LGFA, it’s a fast growing sport. It’s important to have these facilities in place.”

Whereas McCormack spent the last two seasons in Armagh working as a coach under Ronan Murphy, 2023 will see him ascending to the Orchard County hot seat. This won’t be his first foray into management at the inter-county grade as he previously had a two-year stint at the helm of Wexford (2015-16).

Nevertheless, there was a major factor outside of sport that McCormack had to consider before deciding to engross himself in this new role.

“The biggest thing I had to ponder was that I’m only married three months! Going up and down three or four times a week is a big commitment, but I have a very understanding wife. She’s mad into football, mad into the GAA and she has always been supportive. I’m very lucky that way.”

When it comes to seeking inspiration for his burgeoning managerial career, McCormack doesn’t have far to look. The Allenwood club man was one of a number of players to don the goalkeeper jersey during Kieran McGeeney’s reign as Kildare senior football boss from 2008 to 2013.

He was the first-choice netminder in the 2010 championship campaign, which ended in a narrow All-Ireland semi-final defeat for the Lilywhites at the hands of Down in Croke Park. Fast forward 12 years and McGeeney is enjoying a lengthy spell as Armagh senior men’s supremo, at the same time that his former custodian is taking charge of their female counterparts.

Although McCormack hasn't spoken to the Orchard legend since his appointment in September, he is hoping the experience of playing under 'Geezer' can help to develop his skills as both a coach and a manager.

“Kieran has done brilliant things with the seniors and I’ve great respect for him. He’s the best manager that I ever played under. He always used to give great advice.

“Even the coaching styles the last couple of years and the management styles, I definitely take a lot from the way Kieran manages. Dealing with plays and dealing with players. For me, he’s a great example. Hopefully the two of us can give Armagh success.”

Given they have qualified for the knockout phase of the All-Ireland senior championship in each of the past six seasons, there is no doubting the potential is there within Armagh ladies football at the present moment. This year saw them securing the Ulster title courtesy of a gripping extra-time success over Donegal, but there was frustration elsewhere for the players.

Having lost out to the same side in the Lidl National Football League Division Two showpiece, Armagh came up short to eventual finalists Kerry at the last-eight stage of the TG4 All-Ireland series.

You have to go back to 2006 for the last time the county competed in a Brendan Martin Cup decider, but McCormack is adamant his new charges are more than capable of being in the mix for top national honours next year.

“We’re not far away in terms of Armagh getting over the line. All the teams are very close. There’s a kick of the ball I’d say between all the teams at senior level. Losing to Kerry in the league final was very disappointing. I just felt we left it behind us. In the All-Ireland quarter-final, it was the same thing.

“It was a double-header, but even in the match after it, Meath got through by the skin of their teeth, the last kick of the game just to get over Galway. It’s going to be an interesting season.”

Even though McCormack’s first game as Armagh manager is a few months away yet, he is already putting his plans in place for 2023. He has been a regular presence at club championship matches in recent weeks and as well as touching base with last year’s panel, the Crumlin College lecturer is introducing a plethora of fresh faces to the county squad for the season to come.

“I’ve seen every one of the girls who were on the panel from last year and I’m after bringing in eight new girls. I’ve obviously seen them play as well. Over the last two weekends, I have met all the girls on a one-to-one basis and had a chat with my backroom team as well,” McCormack added.

“I just think that’s important. To see where they are. To see if there is anything we can improve on for this year. It’s very important to touch base that way.”