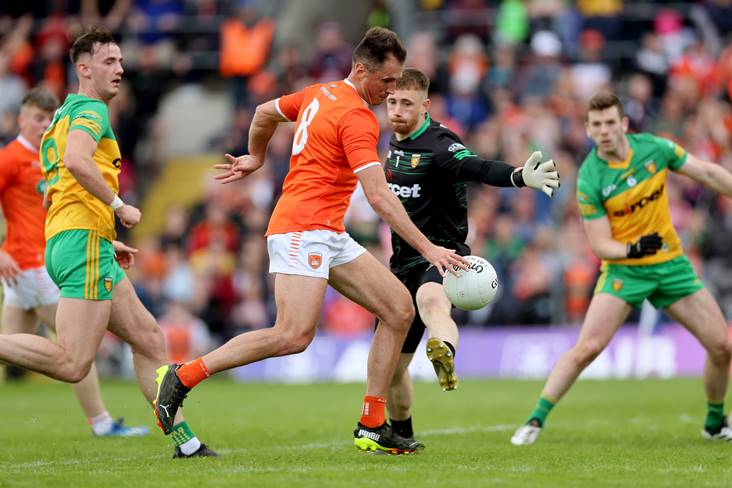 Armagh avenged their earlier championship defeat to Donegal with another impressive attacking display to advance to the All-Ireland senior football championship quarter-finals for the first time since 2017.

The two sides have seen a lot of each other this season - Declan Bonner's side got the better of it in the Ulster quarter-final back in April but were beaten by a much superior Orchard County outfit in today's second round qualifier tie at St Tiernach's Park in Clones, 3-17 to 0-16.

Following last weekend's success over reigning All-Ireland champions Tyrone, the large Armagh crowd made themselves heard right from the throw-in when a long ball sent in by Rian O'Neill found the hands of Rory Grugan and the wing-forward buried to the net for one of the fastest goals in championship history.

Man-of-the-match O'Neill, who finished with a personal tally of 1-7, played a leading role in a runaway 10-point victory for Kieran McGeeney's men and the Crossmaglen star scored their second goal in the 31st minute when he converted via a penalty after Aidan Nugent was hauled down by goalkeeper Shaun Patton.

Donegal absorbed the concession of Grugan's early strike with a series of points from talisman Michael Murphy (3), Ryan McHugh, Paddy McBrearty and Shane O’Donnell to open up a four-point lead midway through the first-half, 1-2 to 0-9, but Patton's kickouts which had been excellent from the start was where it all went wrong for Bonner's men.

The St Eunan's clubman was black carded for his foul on Nugent when he was about to pull the trigger after a poor kickout was intercepted, O'Neill made no mistake from the spot past stand-in 'keeper Caolan McGonagle.

Leading 2-8 to 0-10 at half-time, Armagh tails were up as they kicked for home on the restart by posting the first five scores of the second-half and their opponents never looked like mounting a comeback, while a third goal by Stephen Sheridan was the icing on the cake of a dominant performance from McGeeney's troops.