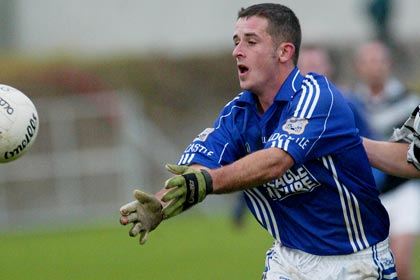 Oldcastle and Kilmainhamwood played out the second round of the Junior C Championship in Carnaross Saturday evening.

The conditions were perfect for football so neither team could have any excuses. Oldcastle started the better and were getting into good scoring positions only to get fouled. They hit two early frees before Packie Kevin broke through to score an emphatic goal.

Everything was clicking early on for Oldcastle as Philip Reilly kicked another score after some good play. Kilmainhamwood started to fight back and notched a couple of scores themselves. Oldcastle started to struggle scoring for about ten minutes dropping shots short and kicking wides but they composed themselves just before half time as John Smith kicked a great score with his left foot. At the half Oldcastle were leading 1-06 to 0-04. Oldcastle again started the second half very well and were sharing the scoring burden around as Conor Delaney, Brian Griffin and Colm Caffrey. When Oldcastle goalkeeper Mark Fitzsimmons was called into action he made a very good save. Brian Griffin scored a wonderful goal late on to rub salt into the wounds.

Kilmainhamwood tried getting back into the game scoring a consecutive goal and point as well as two other goals but Oldcastle were too strong. The final score in Carnaross was Oldcastle 2-18 to Kilmainhamwoods 3-06.