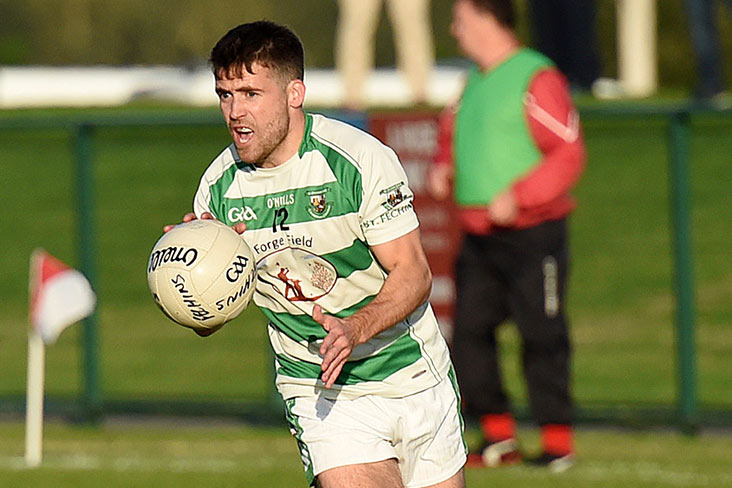 St Fechins held off a second half rally from Oliver Plunketts at Dunleer on Satruday afternoon before securing their place in the last four of the Intermediate Championship.

Ronan Holcroft was once again in form for the Termonfeckin side as he finished with ten points in the 0-18 to 1-9 win.

Although it was the Plunketts who were first off the mark through Conor Early, the Fechins got back on terms through Niall Devlin before going on to dominate the remainder of the half. Danny Burnell and Joe Corrigan were on target along with Holcroft as their side went on to lead by 0-7 to 0-4. Stephen Keeley added to further scores from Early for the Plunketts.

An Eoghan Duffy point at the start of the second half kicked off another period of dominance for the Beaulieu men as they increased the gap to 0-14 to 0-5 at the end of the third quarter.

The Plunketts were determined not to go down without a fight and saw Early give his side hope with the only goal of the match. The same player added three points to cut the gap to 0-14 1-8 with ten minutes remaining to keep the game in the balance.

However, the Fechins composed themselves and points from Holcroft and Duffy helped them come out on top by six.

Cooley Kickhams also made it into the hat for the semi-final draw when they came from behind at the break to defeat Young Irelands by 0-15 to 1-8 at St Brigid’s Park.

Peter McStravick hand Cathal Ferriter had the Dundalk side in front twice in the early stages only for the only for the in-form Cian Connor to equalise on each occasion.

The Irelanders struck the first major blow when Ferriter scored the only goal of the game on 15 minutes. His side maintained the three-point advantage until the closing stages of the half when late scores from Brian White and Aoghan McGuinness cut the deficit to 1-5 to 0-7 at the break.

Cooley edged ahead early in the second half through Ferghal Malone and Connor and never looked back after that as the Young Irelands faded.

The Dundalk men managed only three second half points while Cooley were in impressive form at the other end as Connor and White helped them emerge with a four-point win.

A strong opening quarter provided the platform for Kilkerley Emmets as they advanced to the semi-finals at the expense of Sean O’Mahonys at Clan na Gael Park on Saturday evening.

The Emmets went six points clear in the first quarter and never looked back as the Dundalk men were unable to bridge the gap.

Tadhg McEnaney (3), Conor Quigley (2) and Ewan McEnteggart were all on target in the opening quarter to leave their side 0-6 to no score ahead at the first water break.

It got even better for the Emmets when Daniel McKeown scored the first goal of the game immediately after the restart.  Stephen Kilcoyne and Terry Kelly got the first scores on the board for the O’Mahonys but their side trailed by 1-8 to 0-4 at the break.

The Point Road side rallied at the start of the second half with points from Conor Finnegan, Kyle Carroll and Thomas Rice to cut the gap to four with ten minutes to play.

However, Kilkerley regained control in the closing stages and added points before Fintan Brady found the net to settle the issue.

Hunterstown Rovers are also safely through to the last four after recording a comfortable 1-13 to 0-7 win over St Kevins at Stabannon on Friday evening.

The Philipstown side went into the game on the back of a very impressive display against the Clans in their final group game, but were unable to repeat that form against a well-drilled Hunterstown.

It was Rovers who took control from the outset and Ryan Burns set the tone with three points inside the first ten minutes. Glen Matthews and David Finn were also on target as their side went seven clear before points from Cian Callan and Patrick Clarke in the final minute of the half cut the gap to 0-7 to 0-2.

Any hopes of a Kevins comeback were short lived as Hunterstown continued to dominate with Burns and Finn helping to stretch the lead to nine before Dean Burns scored the only goal of the game at the end of the third quarter to make it 1-12 to 0-3.

With the outcome inevitable, the final quarter saw little in the way of entertainment. The Kevins battled to the end with points from Callan and Seanie Crosbie but it was Hunterstown who emerged as nine-point winners.