Ladies: Armagh pull away from Longford in second-half to claim All-Ireland U16 'C' crown 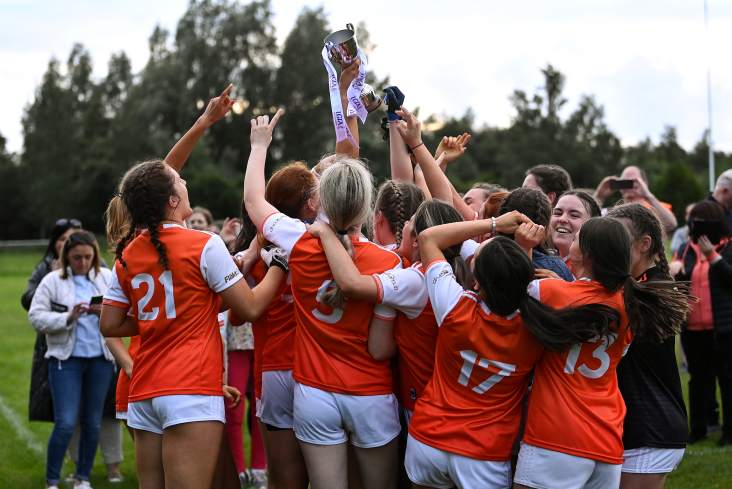 Armagh players celebrate with the cup after their side's victory in the All-Ireland U16 C final at Lisnaskea Emmetts in Fermanagh. Photo by Piaras Ó Mídheach/Sportsfile

Lucy Doyle scored 1-5 and Armagh claimed the All-Ireland Ladies Football Championship U16 ‘C’ title with victory over Longford at Emmett Park in Lisnaskea.

Despite losing star forward Doyle to a yellow card, midway through the second half, the Orchard County were excellent and finished stronger for a deserved win.

There were two points between the sides going in at the break with the Ulster outfit leading 1-6 to 1-4. Both teams had plenty of goal opportunities in the first half but only scored one each. Longford keeper Siobhan McDonagh pulled off two great saves to deny Eva Cassidy and Claragh Leneghan in added time while Sian Gallagher shot wide.

Longford’s Rachel Quinn opened the scoring in the third minute but Armagh replied scoring 1-3 without reply. Ciara Carr caused Longford’s defence a lot of problems in the opening half. She set up Doyle for Armagh’s goal in the 12th minute.

Longford responded with Gallagher racing through and winning a penalty, one minute later. Grace Cullen dispatched the resultant kick to cut the gap to two points.

While Carr kicked over two points (one free), the Armagh defence were holding the Longford forwards well. The lead was three in the 30th minute when Doyle scored a fine point. Elysia Brady kicked a good point to leave her side trailing by two at the interval.

Doyle put three between the sides at the start of the second half but Longford hit back with a goal from Elena O’Reilly, to draw the game in the 38th minute. Sharpshooter Doyle was sin-binned in the 45th minute. It mattered little to the Orchard County as they tagged on points through Erin Murphy and Lenaghan to restore their three-point advantage.

Try as they might, Longford couldn’t get the scores, with a combination of wrong shot selection and resolute defending from the Armagh girls.

Doyle re-entered the fray and fired over two more points. Carr added another and substitute Rebecca Cunningham coolly shot over the bar as the Armagh girls ran out winners by seven points.